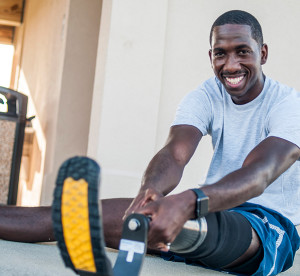 Senior Airman Kevin Greene, a health care management technician with the 920th Aeromedical Staging Squadron, stretches after a short workout Aug. 8, 2017 at Patrick Air Force Base, Fla. Greene lost a portion of his left leg in a motorcycle accident on Dec. 17, 2014.

For most, an amputation would be the greatest challenge they have ever faced in life, but for one Reserve Airman, the real struggle came when he fought to keep serving.

Separation from the service he loved so much was never an option for Senior Airman Kevin Greene, a health care management technician with the 920th Aeromedical Staging Squadron, and after a two-and-a-half-year fight, including three rejection letters and an in-person medical evaluation board, he is once again wearing his Air Force blues and loving every minute of it.

“I remember the night of the accident vividly,” he said. “I was coming home from work and was stopped at a red light when I looked to my right and see the lady in the vehicle next to me point to her window. As I look to see what she’s pointing at, ‘Boom!’”

“Next thing I know, I’m waking up in the hospital,” he recalled. “I hear people in the background crying hysterically, family praying and then the doctor walks in. He said I got into a pretty severe motorcycle accident. He said my brain was fine; there was no spinal damage; however, my left foot was just too severely broken to save and they had to amputate it.”

Greene ended up going through several more surgeries, after his initial amputation on Dec. 17, 2014, as the same leg became infected multiple times. His last surgery in February 2015, left him with three quarters of his left leg.

During his roughly two-month stay at the hospital, Kevin recalled always being surrounded by family, friends and co-workers.

“I definitely felt loved in the hospital,” said the Brooklyn, New York, native. “My immediate family was always there of course, but my Air Force Reserve family surprised me. I knew people in the unit cared, but there was no mistaking it on the drill weekends when I’d have like 40 people coming to visit me. The staff didn’t even know what to do with that many visitors. The love and camaraderie I felt within my unit is the driving factor in my wanting to continue to serve.”

“I remember Chief Martin visiting me often and just putting me at ease,” he said. “I felt like her energy and positivity was at the root of my support system as she motivated others to rally around me.”

Martin said she will never forget that first hospital visit. 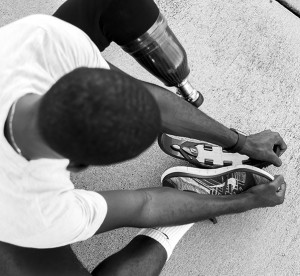 Senior Airman Kevin Greene, a health care management technician with the 920th Aeromedical Staging Squadron, stretches after a short workout Aug. 8, 2017 at Patrick Air Force Base, Fla. Greene, who lost a portion of his left leg in a motorcycle accident on Dec. 17, 2014, is the first and only Air Force Reserve amputee to serve at Patrick AFB.

“It takes a lot to make me cry,” she said. “He’s just such a jokester. He’s always making light of everything.

“When he told me they took his leg, I thought he was joking. I said ‘Kevin that’s not funny.’ When he pulled back the covers I had to walk out of the room.”

Martin said she couldn’t let Greene see her cry because he would have focused on her, when he should be focusing on himself.

“Airman Greene has always been one of our shiny pennies,” she recalled thinking back to when he first joined the squadron in June 2012. “He definitely lives the core values and is always pushing himself to new limits and stepping up to challenges. Even in the hospital, the first thing he wanted to know was when he could come back to work.”

Unfortunately, Greene found out the hard way that donning the Air Force uniform again wasn’t an easy feat. During his first year of recovery, he had a lot of work ahead of him to get back into top physical shape.

“I went into the hospital at 182 pounds and I left at 120 pounds,” he said. “I was in my wheelchair a lot those first few months, and I wasn’t eating.”

After getting fitted with his first prosthetic in March 2015, he decided the road to recovery was best walked.

“It was a tough first few months out of the hospital,” he said. “I knew I needed a change of scenery and to really test out my leg, so a good friend of mine took me on a road trip to my hometown, Brooklyn. We just walked the streets of New York for a week straight. It was exactly what I needed.”

After returning to Florida, Greene decided it was time to get a job again, while he continued to physically ready himself for military service. He followed his passion of working with kids at a local recreation center and coaching youth basketball at a nearby high school.

“Coaching and traveling with the team to different camps that summer was a blessing,” he said. “I was able to stop focusing on my problems and focus on developing and training the guys to not only be better athletes, but people and to value their time. I used myself as the example of how to not take things for granted.”

After a year in recovery, Greene’s unit submitted his first participation waiver to Air Force Reserve Command to be able join them on drill weekends. It was denied. He then faced an initial review in lieu of board in January 2016, which was also denied. But Greene refused to quit.

“Pushing through the boards, we encouraged him not to give up,” Martin said. “If you want to serve, fight it. If they say no, challenge it. Just keep fighting, and he did, every single board.”

Greene’s next step was to submit a world-wide duty request in the spring, which was again denied by AFRC.

“It was discouraging at times; I’m not even (going to) lie,” he said. “But I knew I was meant to be a reservist. There are opportunities to be had in the Air Force that you just can’t get anywhere else. I was thriving in the Reserve before my accident, and I just wanted that sense of purpose and pride that comes with the uniform back again.”

While Greene continued to fight to serve his country, he discovered another calling along the way — helping autistic children.
“I was interning at the Educational Center of Brevard over the summer as a coach working with autistic children, and I just fell in love with it,” he recalled. “I’ve always enjoyed working with youth, but working with children who really, deeply needed help just spoke to me.”

That fall, Greene applied for a position at Kaliedescope Interventions, where he works with lower functioning, non-verbal autistic children ages 3-8.

“Kevin’s worked here a little over a year, and we absolutely love him,” said Pamela Holz, the owner and co-founder of Kaleidoscope Interventions. “I remember last summer one of our non-verbal children had noticed that Mr. Kevin’s leg was a little different than everyone else’s and instead of being embarrassed, he owned it.”

“He took off his leg and showed the child that this is what Kevin has,” she continued. “He explained that he didn’t let it stop him. He does that with every single child. He tells them that nothing’s going to stop you. I don’t see your disability as something that’s going to hinder you. We’re going to work hard and make you stronger. Just like he’s done in his own life.” 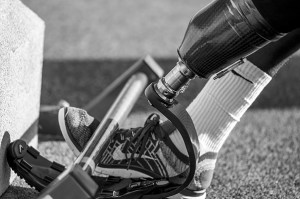 Losing steam in a more than two-year battle, but never giving up, Greene faced his final stepping stone back to military service April 2017 when he traveled to Joint Base San Antonio-Randolph, Texas, to face a medical evaluation board. In addition to talking with board members, he had to pass the Air Force physical fitness test.

“I was pretty confident going into the test,” he said. “I was ready to prove myself once and for all.”

He did well on the waist measurement, push-up and sit-up portions of the assessment, and then came the run.

“I was just so excited to be in the Air Force uniform again that I sprinted those first two laps, which was a mistake,” he said. “Because the third lap I was little slower, and the fourth lap slower. I picked it up a little in the fifth and that’s when an Air Force officer who just happened to be running on the track on his off day started running with me, pacing me and motivating me. I finished at about 13 minutes, and I thank him for that. He said I inspired him, but he inspired me. Just another testament to the Air Force family.”

On his flight home from San Antonio, Greene received word that he passed the board and was being reinstated into the Air Force Reserve.

“Words can’t begin to describe the emotions I felt when I got that phone call from the lawyer,” he said. “This whole process and my accident has given me a new outlook on life. I just tell people to appreciate every moment; cherish every day.”

This year Greene became a father to a baby girl named Gianna. He said he wants to inspire her to achieve her goals.

“She’s going to be a fighter just like her daddy,” he said. “You can bet I’m going to teach her to follow her dreams and to never give up.”