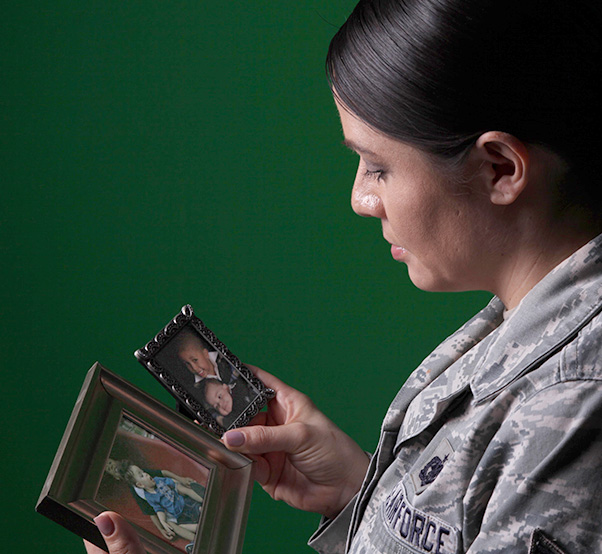 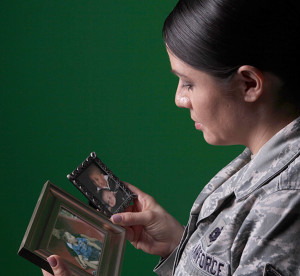 Tech. Sgt. Amee Espinoza, Air Reserve Personnel Center Total Force Service Center personnel customer service manager, looks at photos of her sons. Espinoza lost her youngest son, but turned the tragedy into therapy and found her calling to serve others through counseling. She completed more than 600 hours of direct and indirect counseling services with individuals and groups focused on driving under the influence and driving while intoxicated cases, addiction, domestic violence, conflict resolution, and anger management. She was chosen as the Air Force Reserve Command nominee for the 2016 GEICO Military Service Award.

Following the unexpected death of her youngest son, Jeremiah, she became reckless. She was drinking daily and didn’t care whether she lived or died.

It took a failed suicide attempt and court-ordered therapy for her life to change.

When Tech. Sgt. Amee Espinoza decided to end her feelings of hopelessness, she put her older son Isaiah to bed, kissed him, and then swallowed a handful of valium. At the moment before sliding into unconsciousness, she felt something other than helplessness – regret. The last thing she remembers is screaming.

When the survivor and now mother of two awoke, she was in a hospital bed. Espinoza told the nurses of her experience and was admitted into a mental institution. She spent two weeks in inpatient care and was court-ordered to seek outpatient therapy upon her release.

The court order saved her life and unearthed a calling in her to serve others through therapy.

“I was depressed, hurt, and didn’t want to be around anyone, especially a therapist,” Espinoza said. “At that time, I was unsure if I was going to attempt suicide again. But, I knew deep down that I didn’t want to die. I didn’t want my son’s last memory of me to be his mom being carried away in a stretcher.”

According to Espinoza, it took several sessions for her to begin to “believe” in her therapy. After a couple months she started to look forward to her sessions and eventually her thoughts shifted to the positive. Once she was successfully discharged from the court-ordered therapy, Espinoza started attending support group meetings for bereaved parents. A year later, she was facilitating the group sessions and acting as a victim advocate.

She realized she had a greater purpose in life.

“I knew that my purpose was to use my experience to help others overcome trauma,” she said. “I didn’t feel lonely when I was surrounded by group members. It was an amazing experience, so I decided to enroll in a master’s degree program for Mental Health Counseling.”

During her time in graduate school, Espinoza was required to perform 600 hours of direct and indirect counseling services. She worked with individual and group counselling services focused on driving under the influence and driving while intoxicated cases, addiction, domestic violence, conflict resolution, and anger management, alongside her continued bereavement counseling and victim advocacy. She also provided individual special needs behavior therapy for children diagnosed with Autism Spectrum Disorder.

“When I started working with clients, I started to grasp my own counseling style and I loved it. I consider myself to be a trauma-informed counselor who just wants to assist and help people grow the strength to have a valuable quality of life,” Espinoza said. “This work is so special to me because it gives me a greater purpose. I enjoy doing it and I enjoy serving others.”

Espinoza is an Air National Guard member assigned to the Air Reserve Personnel Center at Buckley Air Force Base, Colorado. Her leadership took notice of her work helping others and decided to nominate her for the GEICO Military Service Awards Program. The annual award spotlights contributions made by enlisted military members in specific areas: drug and alcohol prevention, fire safety and prevention, as well as traffic safety and prevention.

Espinoza was notified by the Air Force Reserve Command in November of 2016 that she was selected as the AFRC nominee to represent the ANG.

“Throughout this entire process of working, going to school full time, and taking care of my family, there were so many times that I wanted to give up. Working more than 15 hours a day at times, all while trying to maintain my own family became stressful,” she said. “The recognition and support of my leaders, subordinates, family and friends gave me the drive to keep pushing. When I was nominated for the award, I was proud and honored.” 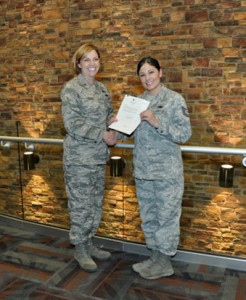 “Amee exudes positivity, no matter the circumstances or obstacles. She utilizes her personal experiences to relate to others going through difficult situations, which aides those individuals in trusting her and her commitment to see them through,” Gomez said. “Dealing with people can be a challenge, considering our various backgrounds, cultures and values. Amee manages to blend those differences into positive outcomes in both personal and professional environments.”

As a mother herself, Gomez said Espinoza’s outlook on life is the pure definition of resiliency.

“After what Amee has gone through, she is still standing. If that’s not resiliency, I don’t know what is,” Gomez said.

Espinoza uses her work and training in the civilian sector to benefit the Air Force as a Master Resiliency Trainer. She enjoys using the skills she has learned through personal experience with trauma and higher education to help her fellow Airmen.

“I believe that resiliency training is so important, not only in the military, but in life in general. People will face trauma, tragedy, personal crisis and other life problems, but we aren’t necessarily meant to understand why these things happen to us,” Espinoza said. “It is important to understand that we can bounce back from adversity. It is amazing what people go through, but having the right tools, the unparalleled support, and knowing how to use those tools and support is what makes us resilient.”

Espinoza continues to serve the Air Force as a MRT and pursue counseling opportunities in the civilian sector. Her personal journey of resiliency continues to inspire those she interacts with on a daily basis, as she spreads a message of optimism and hope to her wingmen.