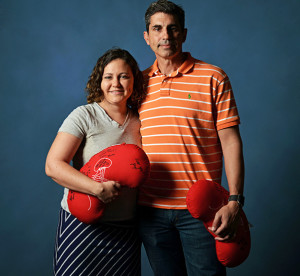 Twenty-two people die each day waiting for an organ transplant, according to the U.S. Department of Health and Human Services. Currently, there are more than 119,000 men, women and children on the national waiting list; every 10 minutes another person is added, lengthening the list every year.

When Erik Singletary, the 20th Fighter Wing Inspector General’s Office wing inspection team manager at Shaw Air Force Base, S.C., found out his daughter, Lauren Brown, needed a transplant, he did not hesitate.

“Initially, I thought something was wrong when my migraines got so bad I’d miss two or three days of work a week,” Brown said.

After receiving treatment from a neurologist in Florence, South Carolina, she discovered her kidneys were causing her to have extremely high blood pressure, which contributed to the migraines. She was later referred to a kidney specialist who performed a biopsy and determined that Brown was suffering from kidney failure.

In February 2016, Brown was diagnosed with immunoglobulin A nephropathy, also known as Berger’s disease, a disease that occurs when the antibody immunoglobulin A sticks in the kidneys causing inflammation and impairing the organ’s ability to filter waste from the bloodstream.

As a result of her condition, she was placed on an organ transplant waiting list at the Medical University of South Carolina in Charleston, where she would eventually receive her lifesaving surgery.

Kidneys are the most transplanted organs, with 17,879 kidneys transplanted in 2015, making up more than 80 percent of total needed organs.

“Being put on a transplant list either means you wait for a match or, if there’s someone willing to get tested, you can get a live transplant,” Singletary said. “They tested me to ensure I was healthy and after two days of testing, we went down the road of, ‘Let’s do this transplant.’”

Brown said she was relieved to know she would receive a kidney, but at the same time was worried about her dad going into surgery. After hours in the operating room, the surgery was a success.

“The thought of the surgery was the scariest part for me,” Brown said. “Once it was over, it wasn’t as bad as I thought it would be. It’s only been six weeks and I’m moving around and don’t have any pain.”

Although the experience was a stressful one, it also helped bring the family even closer together and gave Brown reassurance of her family’s love and appreciation for her.

Brown said the experience has also made her more carefree and gave her the ability to enjoy things more, increasing her mental and physical resiliency.

“Now that I have a new kidney, I have energy,” Brown said. “I was so exhausted before and now I’m hiking. I hiked three miles the other day and felt like I could keep going.”

As of September 2016, more than 130 million adults have registered as organ donors. One donor can save up to eight lives, and improve the lives of many others.

Regardless of age or medical history, anyone can sign up to be a donor. Very few medical conditions, such as HIV infection or active cancer, could prevent donation.

“I’ve always had my driver’s license stamped,” Singletary said, referring to the symbol on his identification that designates him as an organ donor, “but I never realized the effect it could have. Now I do.”

While still on the road to recovery, Brown sees an endocrinologist every other week. Eventually her appointments will lessen, but they will never go away completely.

“She’s got a lifetime of upkeep,” Singletary said. “A donated kidney in a best case scenario goes between on average 15 to 20 years. They don’t last forever.”

Brown does not currently have a plan for the next time her kidney inevitably fails; for now, she is taking everything one day at a time. She said receiving her kidney will allow her to look to the future, something her declining health had previously eclipsed.