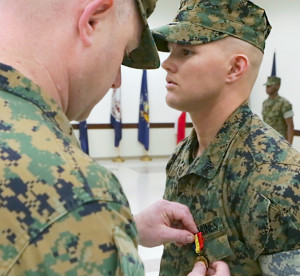 Marine Corps Lt. Col. Vincent Dawson, left, the executive officer of Marine Aircraft Group 41, Marine Forces Reserve, awards Cpl. David Qualls the Navy and Marine Corps medal at the 1st Battalion, 23rd Marine Regiment headquarters in Houston, May 20, 2017. In 2014, Qualls helped save a man stuck in a burning vehicle. According to his award summary, had he not arrived when he did, the man would have died. Qualls is a motor transport assistant operations chief with Marine Wing Support Squadron 471, 4th Marine Aircraft Wing.

Qualls received the highest non-combat decoration for his heroic actions at the scene of a car accident on the morning of Sept. 12, 2014.

While returning to Camp Geiger, N.C., Qualls and then-Cpl. Nathan Bryson, now a Marine veteran who until recently served as a motor transport operator for Headquarters and Support Battalion, School of Infantry East, Camp Lejeune, N.C., came upon a car accident on the Sneads Ferry Bridge in Sneads Ferry, N.C..

When the Marines stopped, a Marine already at the scene approached Qualls and Bryson to see if they had a fire extinguisher. Qualls quickly realized it was a major accident; multiple vehicles were critically damaged after colliding with each other and the retaining walls on the sides of the bridge.

“After we were asked for a fire extinguisher, I just knew something was off,” Qualls said. “I looked over at Corporal Bryson and said, ‘Do you think we should go check it out?’ We immediately got out and went to help.”

Catching fire
One of the vehicles, a white SUV that had severe body and frame damage, was slowly catching fire. Flames and smoke were coming from the engine compartment.

The SUV was driven by Larry Flesher, an electrical technician from Valdosta, Georgia. While driving to work, he struck a vehicle, causing another vehicle nearby to hit him. Flesher, pinned inside the smoky vehicle, suffered a broken femur, arm and ankle.

According to Qualls’ award summary, had he and Bryson not arrived when they did, Flesher would have surely died in the fire.

“This award is the highest award for non-combat valor,” said Lt. Col. Vincent Dawson, the executive officer of Marine Aircraft Group 41, Marine Forces Reserve. “This award recognizes his bravery; putting himself between a fire and a person trapped in a vehicle, and the danger he put himself into.”

“I’m incredibly proud of him, the whole family is,” said Bert Qualls, Qualls’ uncle. “He’s got a great heart and we wouldn’t expect anything different from him. He’s a person of valor.”

Per Federal Regulation code 10 U.S.C. 6246, the Navy and Marine Corps Medal is awarded to service members who distinguish themselves by heroism not involving conflict with the enemy. For acts of life-saving, or attempted lifesaving, it is required that the action be performed at the risk of one’s own life.

Bryson was awarded the Navy and Marine Corps Medal in a ceremony on April 17, 2017.

“Being a Marine definitely affected my reaction,” Qualls said. “But being a Marine and having another Marine come for help, I couldn’t just sit back and do nothing. This is what we do.”