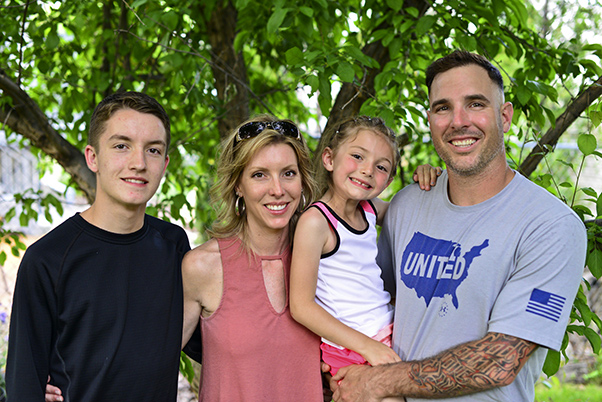 Tech. Sgt. Christopher D’Angelo, right, a missile alert facility manager with the 490th Missile Squadron, Malmstrom Air Force Base, Mont., poses for a photo with his wife, Chanda, son, Jace and daughter, Brittyn at their home in Great Falls, Mont., June 7, 2017. D’Angelo was diagnosed with post-traumatic stress disorder after he was injured by an improvised explosive device January 15, 2008. He said his wife has been very supportive with helping him cope with his PTSD.

On Jan. 15, 2008, Senior Airman Christopher D’Angelo, a heavy equipment operator, was the lead gunner in an armored vehicle convoy on a road near Baghdad. The sun was shining and the air comfortable.

His unit had just transported construction materials to forward operating bases and was currently scouting an area to see how they might transport heavy equipment.

The road they were traveling down was considered by many to be the most fatal road at the time – D’Angelo noticed people, especially children, were being ushered off the street.

If it had been a western movie, the soundtrack would have cued something was coming, he recalled thinking.

Scanning the terrain, the gunner noticed sunlight reflecting off something about the size of a football, partially buried in the ground.

“I was told later it was pointed up at me – it was definitely directed at the gunner,” he remembered. “It was a command-controlled improvised explosive device, so someone had to be watching and pulled the trigger.”

Before he could say anything – warn anyone – it detonated, torching the side of his vehicle.

“I remember waking up in another Humvee with people pulling shrapnel out of my face, sticking the nasopharyngeal (airway) in my nose, just trying to keep me alive,” he said. “I remember seeing a really good friend of mine standing over me, pulling stuff out of my face, crying. Being the happy-go-lucky, smart-ass person I am, I was like ‘what’s going on man, how you doing?’ Just seeing the sheer terror on their faces, I kind of knew something was bad.”

They weren’t far from a medical facility, so D’Angelo was transported quickly and treated in-country. It took nearly three months for him to physically heal, leaving a scar on one wrist, and legally blind and deaf on his left side.

But the worst wounds were invisible. 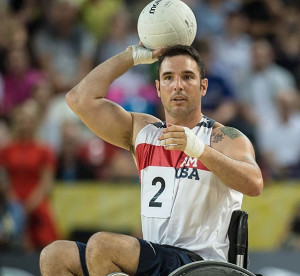 When he got home, D’Angelo said the first week went well – then things changed as irritability and a short temper surfaced.

“I wasn’t sleeping, or when I was, I was having nightmares,” he admitted. “My happy-go-lucky attitude turned into an angry attitude. I was angry all the time. My wife and two boys didn’t want to be around me. I was very explosive at everybody if I didn’t like what was going on. That’s not normally me – I usually try to find the humor in everything. I wasn’t the same person. My wife must have told me a million times, ‘You’re not the same guy I married…I don’t know what happened, but you’re different.’”

He chose to spare his wife, Chanda, the details – she knew only a watered-down version of the horrific event that changed his life forever.

“When he came home, he was angry and distant and stand-offish,” said Chanda, a hair stylist who had no experience with the military prior to her marriage. “He never smiled, never laughed, never wanted to be part of the family. He was just completely different. I had never gotten counseling or talked to by anybody, nothing. So when he came home and he was so angry he would hurt, but I didn’t know the extent of it, and I knew nothing about (post-traumatic stress disorder).”

Meanwhile, her husband stuck with what seemed normal.

“I only felt like myself when I was at work,” the Philadelphia native, said. “I deployed again in 2009, and that’s when I broke down and had a big panic attack. I had to be removed from training because I just collapsed. My commander told me I had to see a mental health provider.”

He wasn’t ready to admit something was wrong, so he lied and told them what they needed to hear so he could get back in the field.

“I was back with my team in Afghanistan within a month,” he said. “It went great until the end of the deployment. We got hit with mortars, all the alarms went off, and I just felt I wasn’t myself. I would never want to put somebody else in danger because I wasn’t able to do my job. That was the breaking point in my mind – if I’m going to keep doing this, keep serving, then I need to ask for help. And I couldn’t go home feeling that hopeless. I’ve heard too many stories of people going home and committing suicide or doing worse.”

D’Angelo finally asked for help. He was sent to Walter Reed National Military Medical Center, Maryland, where he was diagnosed with PTSD.

“They really educated (my wife and me); we were there with other people who were going through the same thing, so it felt normal,” he explained. “We were able to find other outlets to get through it. I take the whole ‘talking about it’ approach, telling my story, being able to help others. I want to get the word out that you’re not alone, there are others going through similar (things). There are ways to help yourself that don’t involve drinking, or drugs, or putting a gun in your mouth. It involves talking to people, getting our minds better.” 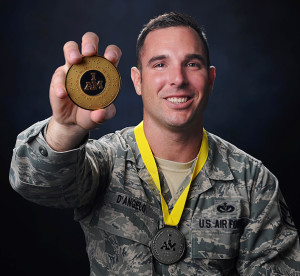 PTSD is a mental health condition that can occur after someone has gone through a traumatic event, such as war-related combat, sexual or physical assault, or a natural or man-made disaster.

“While most servicemen and women return home without any injuries – (or) cope and readjust very successfully – the number of post-9/11 veterans experiencing invisible wounds has been high compared to historical rates,” said Marine Corps Col. Matthew Amidon, the Military Service Initiative deputy director, in “Addressing the Invisible Wounds of War: Creating a Collaborative Tomorrow.”

“Studies have estimated that, at any one time, approximately 10 to 20 percent of the service members who had deployed in the post-9/11 conflicts have symptoms commensurate with a diagnosis of PTSD,” he said.

Because this disorder impacts not only the person who suffers from it, but those who are around them, it is important for all military members to be educated about PTSD. With enhanced awareness, many may be able to avoid developing this condition.

“About 58 percent of the general population will be exposed to trauma at some point in their lives,” said Col. Mark Mavity, the Air Force Surgeon General special assistant for Invisible Wounds and Wounded Warrior programs. “Less than one percent of Air Force members are diagnosed with PTSD. Of that, less than 13 percent are discharged. That basically means roughly 85 percent are able to return to duty.”

D’Angelo still has moments where he struggles, but said his wife is there to help calm him down, and life in general has improved dramatically. Since he’s been home, they have added a now six-year-old daughter to the family.

“I’m coaching soccer now, I’m involved with the kids a million times more than I was before,” said D’Angelo, now a technical sergeant in a special duty assignment as a nuclear facility manager at Malmstrom Air Force Base, Mont. “Having the opportunity to be involved in all the Air Force programs, the programs for wounded warriors, competing in sports, being around others who have been through the same thing – it’s been a life-saver.” 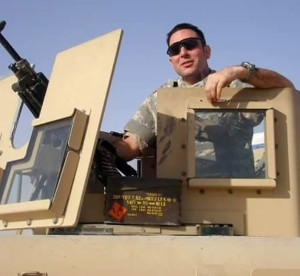 Chanda, the one person who knew more about him than anyone, was attending a Wounded Warrior program with him at Joint Base Langley-Eustis, Va., where she got to hear his story in full as he told it to others.

“The first I had anything to do with the Wounded Warrior program was last November,” the Great Falls, Mont., native said. “That was actually when I first truly started understanding what my husband was going through. It was eight or nine years later.”

Since they began recovery and healing, D’Angelo’s career has moved on, and he continues sharing his advice for others in similar situations.

“Don’t wait as long as I did before realizing it’s real, and doing something about it,” he pleaded. “You’re not alone. Anybody having PTSD or similar issues, there’s help out there. It takes a bigger person to ask for help and to start that treatment, than it does to put it aside and think you can deal with it on your own…because you can’t.”