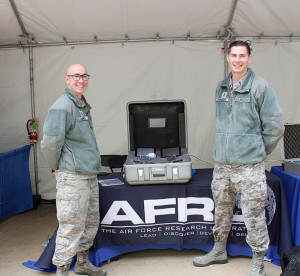 Air Force Research Laboratory physicist 1st Lt. Simeon Hanks dropped out of high school at the age of 17 and joined the U.S. Army. His story is not the typical story of most Air Force scientists.

Though he grew up in various places along the West coast, Hanks calls himself from Redding, Calif., where he moved when he was about 11.

“I was raised by my father and I have no memory of my mother who left when I was about three,” he said. “My father, an unskilled laborer, raised my two brothers and me in a very unstable environment.  When I left to join the Army we were living in a motel in Redding sharing a single room.”

Hanks says the Army gave him the opportunity to escape poverty and serve his country. He could see no other possible path forward.  It also provided him stability and the first regular meals he could remember.

“When I joined the Army I can say with confidence now that I was woefully underdeveloped, both physically and mentally. In basic training, I ate three meals a day for the first time in my life and received an appropriate level of nutrients. I gained 30 pounds in three months and grew nearly 3 inches taller in my first year in the Army. Emotionally and intellectually I had a lot more work to do.”

His first job in the Army was as a helicopter computer technician. Hanks said this training was used in his deployment to Iraq in 2003 where he and a small group of soldiers kept a fleet of Kiowa Warrior (OH-58D) helicopters flying, often improvising or re-using broken components to make necessary repairs.

“I think we all have moments in our life that act as clear chapter breaks,” he said.  “I saw myself getting out of the Army at the end of my four years. But, I knew my father had gotten out of the Army without a plan many years past and I always looked at his story as – ‘you could have retired by now if you had just stayed in.’” 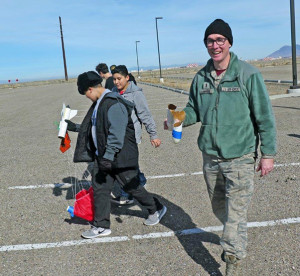 Hanks said he also had a strong supervisor who encouraged him to stay in the Army until he had a plan. “So when I got back from Iraq, I re-enlisted after three years to be a Human Intelligence Collector and Arabic linguist.”

“I did a second deployment in Iraq as an interrogator. But during my deployments I fell in love with physics while reading “Popular Science Magazine,” Simon Singh, Stephen Hawking, websites, and whatever physics based science I could get my hands on. I eventually hit an intellectual plateau that I knew could only be passed by receiving a formal education.”

After nine years, Hanks did get out of the Army to pursue his education. He received a Bachelor of Science degree in physics from Augusta University in Georgia in 2014. He followed this by attending Concordia University in Montreal, Quebec, Canada where he was admitted for a Ph.D. based on a journal article publication and winning an international research presentation.

Rather than completing the Ph.D. program, Hanks joined the U.S. Air Force and was commissioned as a second lieutenant through the Officer Training School in 2016.  He is now assigned to the Air Force Research Laboratory Directed Energy Directorate located at Kirtland Air Force Base.

Hanks’ first job in the lab was with High Power Electromagnetics Division.  “We were working on creating a new layer of escalation of force by providing the warfighter with a non-kinetic (no boom) alternative,” he said. “We spent most our time testing how certain electromagnetic waves affect electronic systems, and in some cases the electronic systems of entire buildings. I recently moved to the intelligence shop to help with intelligence analysis of the technologies being created here at Kirtland in AFRL.”

Hanks explains what he likes best about his job with AFRL. “More than just doing research, I have been given opportunity after opportunity to be a spokesperson for our technology. My job is to help the highest level of military leadership understand the value of non-kinetic options and show that we are making science-fiction into science.”

“I’ve also been highly involved with the AFRL STEM Outreach program in N.M., helping with community outreach and inspiring students to pursue STEM careers. During the school year, I spend four hours every Friday tutoring groups of 6th-9th graders on model rocketry.”

In addition to his job and STEM outreach, Hanks spent a year as the officer-in-charge of the Kirtland Honor Guard Alpha Flight where he and his team worked every fourth week fulltime to include most weekends in fulfilling honors to our nation’s service members.

“I joined the Honor Guard to be the face of the Air Force, to actually have a chance to lead airmen, and to honor those who have served before us,” Hanks said. “Nothing in the world is more humbling than serving at the funerals of service members who have served anytime from the Korean War to today. Presenting the flag to the families of Airmen to show that we as a nation thank them for their sacrifice is a reward and privilege like no other.” 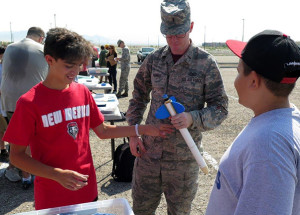 “My most memorable experience in the Honor Guard was providing military honors for a gentleman who had outlived his entire family. His children had all passed before him, he had outlived both his wives, and had no extended family. No blood relatives. But his Air Force family was there for him. Two of my Airmen and I had the honor of being the period at the end of his story of life. We helped the groundskeeper carry him to his final resting place, played taps, and folded the flag to present to the funeral director. And it moved me to the core to know that we will never leave an Airman behind.”

Hanks’ family today includes his wife Sara and their three dogs, Jed, Cash, and Dexter and Sara’s parents whom he is very close to. He met Sara, a former linguist with the U.S. Navy, while they were studying together in Monterey, California. He says she worked to support them while he was in school and is now working on a bachelor of science in nursing. “This will be her third degree,” he says with pride. “Sara is my greatest fan, my best friend, and the voice of clarity when I think I’m losing my mind.”

Hanks’ past-times include studying languages, Portuguese, Arabic and Japanese. He loves to read science fiction and enjoys traveling to as many countries as possible. “I believe it’s important to know other cultures’ values, see what makes people laugh or cry, see poverty manifested in all its forms, and to be a foreigner.”

“Being raised by a single father meant my brothers and I had a lot of freedom. My brothers used that freedom to get into drugs and criminal activities. I sat in my bedroom and formed kingdoms, saved princesses, and got my frog safely across a street.”