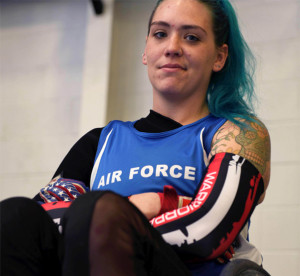 Retired Senior Airman Karah Behrend, a member of the Air Force Wounded Warriors Program, poses for a photo at the Tactical Fitness Center on Joint Base Andrews, Md., Nov. 16, 2018. Behrend has overcome life-altering adversities with her inspiring resiliency, positive attitude and constant effort.

Karah Behrend’s tattooed arms and wild blue hair aren’t the only reasons she stands out on the rugby field. Rugby is a relatively new hobby for Behrend, though her practiced technique paints a different picture. She performs with the intensity, coordination and endurance of an experienced athlete.

And she does it all from the seat of her wheelchair, facing an opponent that the crowd cannot see.

“In 2015, a doctor handed me a sticky note with seven small life-changing letters on it,” the retired Senior Airman and Air Force Wounded Warriors Program member said. Those letters were CRPS/RSD.

She was diagnosed with a disease known as Complex Regional Pain Syndrome — a rare, largely untreatable and widely unknown neurological disease. According to the McGill Pain Index, it is the most painful chronic form of pain known to modern medicine.

“It rates above amputations, phantom limb and natural childbirth,” Behrend said. “It’s a lot to handle on the good days.”

But no one could see Behrend’s pain. It was hidden inside of her body, sending incorrect nerve impulses to her pain receptors. She said her invisible wound even damaged her way of thinking.

“I was very sick and tired of feeling like I constantly had to prove myself, and prove the existence of this (disease),” said Behrend. “Everything was breaking down but you could not see it.”

“Before that event, I was a recluse. I wasn’t functioning,” said Behrend. “But that first CARE event taught me to value myself and see past my disease and disability.”

Behrend said the introduction of adaptive sports guided her back to happiness. She decided she would no longer sit back and play defense in her own life.

She said she started participating in as many sports as possible, from basketball to shooting, and even won a gold medal at Warrior Games. Wheelchair rugby, however, quickly became her passion.

“Adaptive sports gave me my life back,” she said.

At first, Behrend wasn’t wheelchair-bound—she still had the ability to walk, but in Wounded Warrior events, basketball and rugby competitors play in wheelchairs regardless of their mobility. It didn’t take long before Behrend found both success and enjoyment in the activity.

Wheelchair rugby combines elements of basketball, rugby, and handball. Devoting herself to the offensive position of “high pointer,” Behrend said she used her aggression to excel. Off the field, she constantly had to endure the unpredictable ebbs and flows of debilitating, chronic pain. On the field, she had an opportunity to reclaim some brief control in her life – in the form of attitude and effort.

“When I’m playing, it’s the only time I’m free and feel like myself again,” Behrend said. “No limitations, just free.”

Through AFW2, Behrend not only found her release through sports, but was welcomed into an irreplaceable support network of coaches, fellow wounded warriors and team leads.

“I started my job at the end of April (2018),” said Cruz, a team lead for the Air Force North West Warrior CARE Event here. “My first event was Warrior Games with the Air Force, and that’s where I met Karah. From the first time I met her till now, she has really progressed. She’s been kicking butt the past couple months, participating in event after event.”

And much of that progression happened in spite of a huge obstacle—in June 2018, Behrend lost her ability to walk. It happened as a result of a car accident injury, which caused her disease to creep its way to her spinal column and confine her to a wheelchair permanently.

Making matters worse, the spreading of her CRPS also affected her ability to fully control her hands. That makes all her athletic endeavors all the more difficult.

Despite near impossible odds, Behrend presses on.

“I take my life 10 seconds at a time,” she said. “It helps me get through the pain, the frustration and the thoughts of not wanting to go on. It’s okay to have those thoughts and feelings. Allow them, accept them, and embrace them. Allow them to motivate you to do something bigger and badder, just to prove to yourself that nothing can ever stop you.”

From one Airman to another, ask for help and never give...

Airman reflects on cancer battle, gives back with ‘passion project’