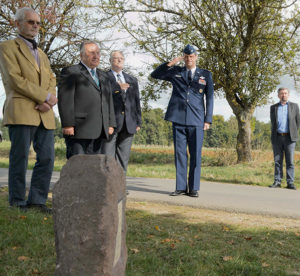 Col. Harry Benham, the U.S. Air Forces in Europe-Air Forces Africa operations and plans chief, salutes during the playing of taps during the revealing of a memorial stone for 2nd Lt. Priesley Cooper Jr. Sept. 25, 2015, in Dietingen, Germany. Cooper was conducting an escorting mission when his P-51D Mustang was shot down. The town of Dietingen buried him and 70 years later held a ceremony to honor him.

The war was coming to an end. The thunder of the P-51D Mustang rolled under him as he dove for a strafing run.
Nobody will know his last thoughts as flak exploded into his aircraft and he was dragged down toward the German countryside. Maybe he took a last look at the picture of a woman and child he had in his cockpit or had thoughts of his hometown.
Second Lt. Priesley Cooper Jr. was shot down during a mission 70 years ago near the village of Dietingen, Germany, during World War II. Cooper remained buried at the village’s local cemetery until 1950 when he was moved to an American cemetery in Belgium.
However, there was no closure for the pilot’s family as only rumors and theories were available about the crash location.
It wasn’t until 2015, when a flight cap showed up and set the village of Dietingen on a journey to find the crash site and return the cap to the pilot’s family.
The former mayor of Dietingen and a group of historians took time to locate Cooper via his cap, which had a social security number written inside of it.
Eventually the village’s journey led them to the 86th Airlift Wing historian, who took the challenge head-on.
Silvano Wueschner, the 86th AW historian, was appreciative of Dietingen’s caring and compassion for the pilot. 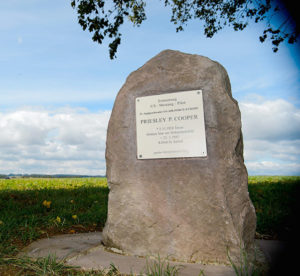 A memorial stone sits near the location of the crash site of 2nd Lt. Priesley Cooper Jr. Sept. 25, 2015, in Dietingen, Germany.

“It is significant that after 70 years someone would turn it over to the mayor for repatriation to the family,” Wueschner said. “That to me was an act of immense kindness. Who would think that someone would still have the family in mind after all this time?”
He discovered two relatives in Texas and records describing Cooper’s mission and his unit. Cooper belonged to the 52nd Fighter Group, now based out of Spangdahlem Air Base, Germany. The relatives were contacted and informed of the developing situation.
“Having read the account of our Uncle Priesley Paul’s last mission and final resting place, I am moved in ways deep and powerful,” Cooper’s nephew, Ben Warton, wrote in an email. “The grief over Priesley Paul is generational in nature and thus has been shared by his descendants. (The work) has assuaged that grief and replaced it with a sense of pride and appreciation for life well lived for one who will be forever young.”
The village felt they could still do more and set a date for a memorial stone laying ceremony. Unfortunately, due to age, Cooper’s relatives were unable to be present during the Sept. 25 ceremony.
“(This journey and memorial are) act(s) of reconciliation and meant to convey compassion and sympathy to the families in the United States years after the war,” said Hubert Burkard, the Dietingen mayor emeritus.
During the ceremony, Col. Harry Benham, the U.S. Air Forces in Europe-Air Forces Africa operations and plans chief and an F-15E Strike Eagle pilot, spoke about being a young fighter pilot in combat and understanding Cooper’s fears, thoughts and emotions as he went into combat. He also spoke about how grateful he was that someone was there for Cooper when he crashed and died.
“In death, enemy and friend fade,” Burkard said. “This monument is dedicated to the memory of the American, but at the same time, to the German soldiers who were forced into this excessive and unfortunate war. We should also remember the innocent men, women and children of the civilian population who died or were left to suffer.”
Standing side by side, 70 years later at the crash site, the only interruption to the silence was a bugler playing taps and the snap of feet as Benham and other airmen joined the citizens of Dietingen to offer closure to a family, bring two nations together, and give a final salute to a fallen airman.