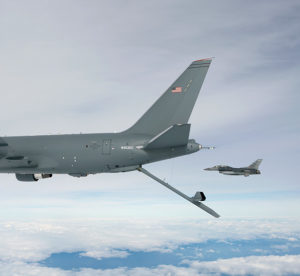 The KC-46A Pegasus deploys the centerline boom for the first time Oct. 9, 2015. The boom is the fastest way to refuel aircraft at 1,200 gallons per minute.

The KC-46A Pegasus notched another success this week when the systems at the heart of aerial refueling were demonstrated on EMD-2 with the deployment of both drogue systems and the boom.
On Oct. 8, EMD-2 successfully extended the drogue refueling baskets from both the Centerline Drogue System (CDS), located on the belly of the fuselage, and from the wing aerial refueling pods (WARP), located on the wing tips, for probe receiver aircraft. On Oct. 9, EMD-2 extended the boom, the telescoping tube which an operator on the tanker aircraft extends to receptacle-equipped receiver aircraft.
“The core mission of Pegasus is to fuel the fight, so deploying the boom and drogues signals real progress toward demonstrating the ability to pass fuel in flight,” said Brig. Gen. Duke Z. Richardson, the program executive officer for tankers at the Air Force Life Cycle Management Center. “This sets the stage for the main act, which is hooking up to and refueling an aircraft in flight.”
The rigid, centerline boom used on the KC-135 Stratotanker and KC-10 Extender, has been the Air Force standard for in-flight refueling since the 1950s. With a 1,200 gallons per minute transfer rate from the KC-46, the boom will be the fastest way to refuel. Like all previous tankers, the Pegasus can refuel a single aircraft at a time on the boom. 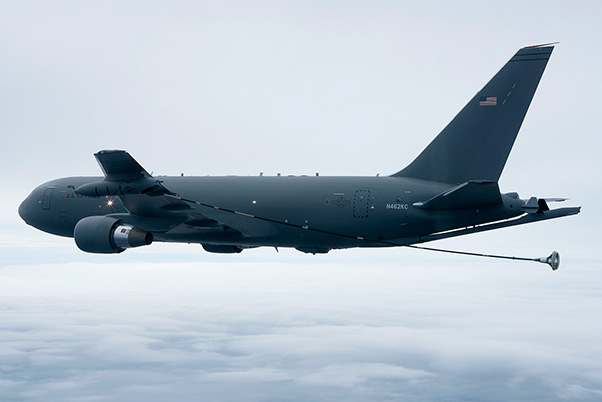 The KC-46A Pegasus deploys the drogue from the wing aerial refueling pods located on the wing tips Oct. 8, 2015. The drogue systems are used to refuel helicopters along with Navy and Marine Corps aircraft.

On the other hand, Air Force helicopters and all Navy and Marine Corps aircraft use the hose and drogue method of refueling. The two drogue systems on the KC-46, CDS and WARPs, pass fuel at a rate of 400 gpm, and the WARPs can refuel more than one aircraft at a time. The KC-46A is a leap forward, as it can conduct boom and drogue refueling on a single mission without landing to reconfigure.
“These capability gains are vital to the tanker mission in support of global reach and global power providing the U.S. military the ability to extend the range of aircraft to respond wherever it’s called to duty,” said Col. Christopher Coombs, the KC-46 system program manager. “This tanker will be able to refuel any fixed-wing aircraft or helicopter in the (Defense Department) fleet, while being able to take on fuel itself,”
The Air Force contracted with Boeing in February 2011 to acquire 179 KC-46As to begin recapitalizing the aging tanker fleet. The program is currently working to meet the required assets available date, a milestone requiring 18 KC-46As and all necessary support equipment to be on the ramp, ready to support war fighter needs by August 2017.