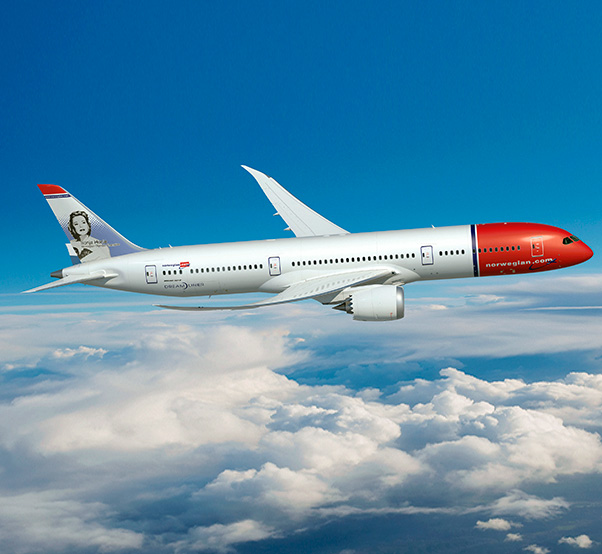 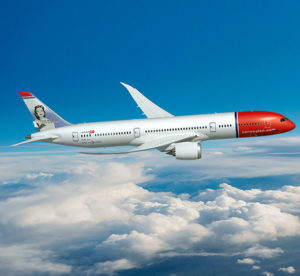 Boeing and Norwegian have finalized an order for 19 787-9 Dreamliners valued at more than $5 billion at current list prices.
The order also includes options for 10 more 787-9s, as the carrier looks to significantly grow its existing long-haul fleet into the next decade. It is the largest single order for 787-9s from a European airline.
Norwegian currently operates eight 787-8s and has previously ordered 11 787-9s through lease agreements. With today’s order, the carrier, headquartered in Oslo, will expand its total 787 fleet to nearly 40 airplanes in the coming years.
“This order of 19 new Dreamliners is a major milestone and enables Norwegian to offer a wide range of new routes to consumers worldwide. The order is also essential to further strengthening the company in the global competition,” said Bjørn Kjos, Norwegian’s CEO. “After two years of operating low-cost long-haul flights, our load factors have averaged in the nineties, which proves the demand for affordable flights between Europe and the US and Europe and Asia. Future growth and competiveness in the long-haul market depends on the fuel-efficient, state-of-the art 787 Dreamliner. Not least, the Dreamliner offers the best passenger experience.”
The 787-9 complements and extends the 787 family. With the fuselage stretched by 6 meters (20 feet) over the 787-8, the 787-9 can fly up to 20 percent more passengers and 23 percent more cargo farther yet with the same exceptional environmental performance – 20 percent less fuel use and 20 percent fewer emissions than the airplanes they replace.
“Norwegian has led the way in utilizing the exceptional performance of the 787 to develop a successful low-cost long-haul operation,” said Todd Nelp, vice president of European Sales, Boeing Commercial Airplanes. “The addition of 787-9s to the Norwegian fleet will enable it to grow its route structure, while providing more range and capacity with outstanding passenger comfort.”
The 787-9 leverages the visionary design of the 787-8, offering passenger-pleasing features such as the industry’s largest windows, large overhead bins with room for everyone’s bag, modern LED lighting, air that is cleaner, more humid and at a higher pressure for greater comfort and technology that senses and counters turbulence for a smoother ride.
Norwegian serves more than 130 destinations across Europe, North Africa, the Middle East, the USA and Southeast Asia, with a fleet that includes 90 Next-Generation 737-800s and eight 787-8s.
In 2014 the airline carried nearly 24 million passengers and has won numerous awards for its onboard service, including a SkyTrax award for ‘Best low-cost long-haul airline.’ With today’s order for 19 787-9s, Norwegian has more than 150 unfilled orders from Boeing, including 100 737 MAXs.