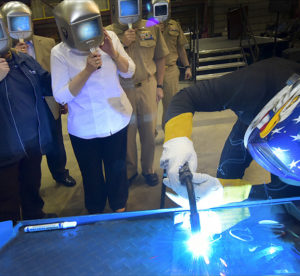 A welder authenticates the keel by welding the initials of LCS 15 sponsor Sharla Tester onto the keel plate. The Keel Laying is the formal recognition of the start of the ship’s module construction process.

The Lockheed Martin-led industry team officially laid the keel for the U.S. Navy’s fifteenth Littoral Combat Ship, the future USS Billings, in a ceremony held at Fincantieri Marinette Marine in Marinette, Wisc.
Ship sponsor Sharla D. Tester completed the time-honored tradition and authenticated the keel of Billings (LCS 15). Tester had her initials welded into a sheet of the ship’s steel, which will ultimately be mounted in the ship throughout its entire service.
“It is an honor to serve as sponsor of the future USS Billings. My prayers are with the industry’s shipbuilding team and the future crew,” Tester said. “This will be a magnificent warship, and I know the people of Billings, and all Montanans, will proudly support her when she enters the Navy fleet to protect our nation.”
Billings is a flexible Freedom-variant LCS that will be designed and outfitted with systems to conduct a variety of missions. The industry team building Billings has delivered three ships with seven others in various stages of construction and testing. The future USS Milwaukee (LCS 5) will be commissioned in Milwaukee on November 21.
The nation’s first LCS, USS Freedom, completed a U.S. Navy deployment in 2013, and USS Fort Worth (LCS 3) is in the midst of her 20-month deployment to Southeast Asia.
“The LCS platform is proving the Navy’s concept of operations with its flexibility in supporting a broad range of missions, from anti-submarine and anti-surface warfare to mine countermeasures,” said Joe North, vice president of Littoral Ships and Systems at Lockheed Martin. “This industry has shown it can adapt to meet the Navy’s most challenging missions, anywhere in the world.”
The Lockheed Martin-led LCS team includes ship builder Fincantieri Marinette Marine, naval architect Gibbs & Cox, and nearly 900 suppliers in 43 states.
“We are proud to welcome Mrs. Sharla Tester, sponsor of the LCS 15 Billings, to Fincantieri Marinette Marine,” said Jan Allman, president and CEO of Fincantieri Marinette Marine. “LCS 15 is the next ship to make the journey through our shipyard before joining the Fleet, and will carry the spirit of Billings and this dedicated industry team, as she sails the globe.”
Lay the keel is a shipbuilding term that marks the beginning of the module erection process, which is a significant undertaking that signifies the ship coming to life. Modern warships are now largely built in a series of pre-fabricated, complete hull sections rather than a single keel, so the actual start of the shipbuilding process is now considered to be when the first sheet of steel is cut and is often marked with a ceremonial event.