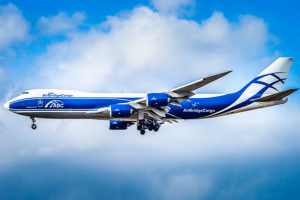 Boeing has delivered two 747-8 Freighters to AirBridgeCargo Airlines, part of Volga-Dnepr Group, and one of the leading international scheduled air cargo carriers.
The airplanes are the first to be delivered as part a memorandum of understanding, signed between Boeing and Volga-Dnepr Group at the Paris Air Show in June 2015.
The deal calls for more 747-8 Freighters to continue to help ABC provide some of the best cargo carrying service in the world. The agreement also adds the Antonov-124-100 aircraft to the long-term logistics support for Boeing and its partners.
“For Volga Dnepr Group, adding more new generation 747-8 Freighters will allow to secure further development of the Group’s scheduled business, AirBridgeCargo Airlines, and keep the airline’s high growth rates,” said Denis Ilin, executive president for AirBridgeCargo Airlines. “This is a celebration of successful partnership with Boeing, which will enable the airline to continue providing its customers with the exceptional air cargo services they are used to.”
“We appreciate ABC’s confidence in our products and look forward to our successful cooperation in the future. We are honored to see that one of the two new 747-8 Freighters delivered, is the 100th 747-8 for Boeing,” said Marty Bentrott, vice president, Middle East, Russia and Central Asia Sales, Boeing Commercial Airplanes. “Our enduring partnership with Volga-Dnepr has shown the value that this iconic airplane brings to the air-cargo industry.”
The planes will be deployed on the expanding network under winter schedule 2015/2016, between Asia and the United States. With today’s deliveries, ABC’s fleet now consists of eight 747-8 Freighters, five 747-400 Extended Range Freighters, and two 747-400 Freighters.
The 747-8 Freighter provides cargo operators the lowest operating costs and best economics of any large freighter airplane while providing enhanced environmental performance. It offers 16 percent more revenue cargo volume than the 747-400, while keeping its iconic nose door.