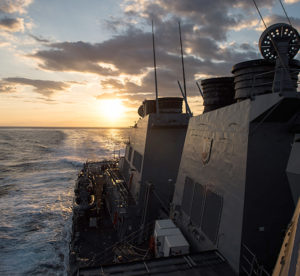 Arleigh Burke-class guided-missile destroyer USS Stethem (DDG 63) joined with People’s Liberation Army-Navy PLA(N) guided-missile frigate Xuzhou (FFG 530) to practice the Code for Unplanned Encounters at Sea and conduct a search-and-rescue exercise, Nov. 20.
Stethem concluded a scheduled port visit to PLA(N) East Sea Fleet of Shanghai that same day, where crew members of both ships took part in cultural exchanges, ship tours, receptions, and sporting events.
“The exercise was the culmination of our visit with the PLA Navy,” said Cmdr. Harry Marsh, Stethem’s commanding officer. “Each day and interaction brought our crews and navies closer, so that by the end of the week, the exercise was smoothly conducted. Our continually improving relationship with the PLA (N) is the entire reason why these visits are so crucial to our partnership.”
Stethem visited Qingdao, China, in July and operated with the PLA(N) North Sea Fleet.
“This is our second visit to China in three months,” said Lt. Erika Betancourt, Stethem’s operations officer. “The strides we have made in our partnership and operational cooperation improve both our ability to conduct exercises and our interactions at sea.”
CUES, a set of procedures endorsed by naval leaders at the Western Pacific Naval Symposium in April 2014, is a guideline for unplanned maritime encounters while at sea, providing standards for communication, safety procedures, and maneuvering instructions for naval ships and aircraft. Stethem and Xuzchou rendezvoused and used CUES as a signaling protocol to indicate ship maneuvering, and passed Morse code to one another. Xuzhou then dropped a search-and-rescue dummy in the water, which was retrieved by one of Stethem’s small boats.
“Search and rescue is all about saving lives,” said Quartermaster 3rd Class David Butler, from Braselton, Ga. “Having the chance to train with PLA(N) in SAR means one thing — we are better prepared to save more lives.”
Stethem is forward deployed to Yokosuka, Japan, and as a member of Destroyer Squadron 15, plays a vital role in maintaining partnerships in the 7th Fleet area of operations.