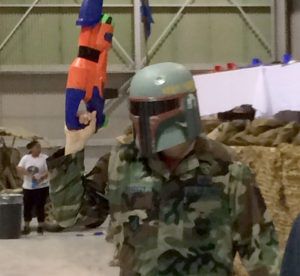 A few years before 9/11 I was researching a book project related to the Army Air Forces in England during World War II and found online an album of Glenn Miller and his Army Air Force Band.
It had all the hits and joy on it, “Moonlight Serenade,” the “St. Louis Blues March,” and of course, “The American Patrol.”
In the same days of early online catalog sales in the 1990s, I found another offering, “Popular Music of the Third Reich.” Because it was appropriate to my research, I ordered that one too.
The contrast in pop music of its day was stark and unnerving. There were some marching tunes on the Nazi album, like for “The Condor Legion,” named for the Luftwaffe volunteers that bombed Guernica to the stones, giving Picasso one of his greatest works depicting human misery under bombardment.
There were also some Glen Miller-Tommy Dorsey-style imitation Big Band offerings. They had lyrics in English to broadcast as propaganda for Joseph Goebbels from a group called “Charlie’s Dance Band.”
The lyrics lampooned Winston Churchill as a drunkard and President Franklin Delano Roosevelt as a tool of “the international Wall Street and Jewish cabal.”
In other words, all the Nazi pop music was vile, racist, nasty and sinister with intent.
Contrasted with the innate joy in the Big Band Sound, my musing prompted a kind of personal social theory, that one of the reasons for the victory of the Allies over the Axis was its appreciation of creativity that was joyous and exuberant, and that would, in the end, contribute to a spirit that would vanquish tyranny.
“Moonlight Serenade,” and the spirit of love and hope that pervaded the Big Band sound so overwhelmed the nastiness of the Nazi’s “Charlie’s Dance Band” that the Glen Miller music is alive today, with the other rot of the Third Reich consigned to history’s rubbish.
It feels no less so today, as the world shudders at what happened in Paris, and Brussels shut down its streets in the face of the terrorist threat, and the survivors of Beirut and Mali try to consider life’s next offering. 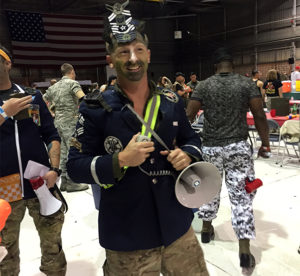 So, the occasion for “Combat Dining Out at Edwards Air Force Base” offered fresh opportunity to revisit that personal social theory.
On Saturday night, the senior Non-Commissioned Officers at Edwards — the California air base where stealth and other technologies are tested — hosted the 25th annual celebration of “Combat Dining Out.”
The evening is a kind of overture with bits and pieces of Harvard’s Hasty Pudding Club mixed in with traditions of the British military mess dining rituals, mashed up with pure United States Air Force jubilation in service.
“We have to have fun,” said one of the base chaplains. “Our young airmen are working 60-hour weeks, and this is a remote base that can be lonely for young people away from home for the first time.”
Noted by all the leaders in attendance was that Security Police from Edwards are among some of the most continuously deployed troops in the Air Force contingent serving overseas.
About 300 airmen, and their spouses, crowded into a massive hangar with Old Glory draped from the rafters with hangar-size majesty. There was a table set for the base commander, and his chief NCO, and their wives, reminiscent of the table in some iconic Arthurian court.
Plastic drinking mugs were set out by the hundreds at long tables, with one side of the hangar set out for the “Blue Team,” and the other for the “Red Team.”
My Army veteran pal, Danny Bazzell, who is executive officer for the West Coast Chapter of the Brotherhood of Tankers, brought me along to the revels at the invitation of Air Force Tech Sgt. Michael Burd, who leads the Air Force Sergeants Association at Edwards.
“I had no idea what to expect,” said Bazzell, who also is an officer of the Edwards Civilian-Military Support Group. “Now, I can hardly wait for next year.”
We sat across the table from servicemen and women who were outfitted for the evening as Forrest Gump, Lt. Dan and, and Forrest’s best buddy of Vietnam, Bubba. The guy decked out as Bubba could recite every brand of shrimp ever fished from the cinematic bay for the “Bubba Gump Shrimp Company.”
They sat a few seats down from an airman dressed as Boba Fett, the helmeted robotic mercenary of Star Wars, and across from a hippie-fied airmen dressed in a bozo wig with with flowers in his hair from the Summer of Love in San Francisco.
Weaving throughout the company of airmen and their family — it was family friendly with children at table — there were ninja warriors, and airmen wearing a mix of Middle East shemagh scarves, special operations gear, and hundreds were armed with squirt guns and water balloons, super soakers and pails of water.
As it turned out, the mess tradition of “Combat Dining Out at Edwards” has the mission objective of sharing a meal, sharing ceremonial toasts, and unleashing the biggest squirt gun battle on the West Coast, with a ritual ending, the lifting of glasses of “Grog” with all mugs slammed on the table as salute to everyone in service everywhere.
In a military that has operated in the “Post Tailhook” environment for more than 20 years, and works to recover reputational damage from military sexual trauma and sexism, “Combat Dining” is all gender, all ages, and straightforward fun without jumping the rails. 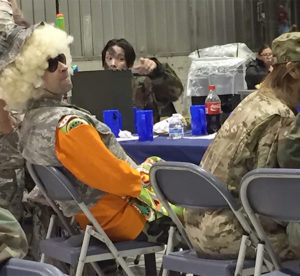 “Combat Dining Out” is a morale event in a military that is working purposefully to integrate males and females in the ranks together. The room was simply awash in men and women airmen, officers and enlisted, all enjoying a few hours of fun, with a dozen or so “Rules of Engagement” for the evening.
For example,
Rule 1: Guests must be in combat attire, any combat uniform, or its equivalent (including ninja gear).
Note: Best t-shirt in the room, “Stay Calm and Return Fire.”
Rule 5: Only thing to be thrown in the mess is water. Absolutely no food throwing!
Rule 8: No cursing! Participants will keep all toasts and comments within the limits of good taste and mutual respect, however, good natured humor is HIGHLY encouraged.
Rule 10: Participants WILL ONLY toast with water during the POW-MIA ceremony.
When the President (one of Edwards’ two commanding officers) directs a violator to the Grog
Bowl … the individual proceeds to the bowl and:
– Halts and executes a salute to the President, and performs “about face”
– Fills a cup full of grog and toasts ‘To the mess,’ and drains the cup then inverts cup over head.
– Completes another “about face” and salutes the president.
Thus, the traditions of hereditary commons with British mess forebears are upheld.
Glasses were lifted in toasts to the Commander-in-Chief, the President of the United States, and also to the Secretary and Chief of Staff of the Air Force, to all those serving overseas, and to all POW-MIAs.
“To the chief,” glasses were lifted.
Mess Hall-style burgers and dogs were served up by Korean-American immigrant restaurateur Jin Hur, whose son served a high-casualty deployment with the Marines in Afghanistan.
Emblematic of this event were dozens and dozens of young female airmen, many from the security forces, some who had served at far-flung locales like Ali Al Salem Air Base in Kuwait, Baghdad International Airport, and Bagram Air Base in Afghanistan, attested to by their T-shirts.
Young people who once might have been mistaken on greeting as college co-ed students now tote A-4 carbines in forward operating areas worldwide.
A few days in advance of Thanksgiving, Brig. Gen. Carl Schaefer who commands the 412th Test Wing at Edwards, offered the toast for all troops serving in deployments worldwide, away from their families.
Schaefer, in combat “battle rattle” rig, raised his glass in toast to all those deployed and away from family, and as President of The Mess, pronounced, “This evening has been awesome!”
“We work hard, and we play hard,” Schaefer said. “And if anyone here has had a drink tonight, you are not driving! Go with your family or the AADD will help you get home.”
That would be the Airmen Against Drunk Driving.
The streams of water flashed across the hangar, and the water balloons flew. The “Blue Team” was awarded for “Best Salutes and Toasts,” and the “Red Team” was honored for winning the water fight.
Will terror and tyranny prevail over free peoples who are creative enough to compose “Moonlight Serenade” and “Boogie Woogie Bugle Boy of Company B”?
Will the murderers and torturers of ISIS and its adherents outlast the culture of some of the worlds most adventurous and optimistic young people, people who deploy globally on short notice and who appreciate Boba Fett and Forrest Gump?
Ask the Third Reich propaganda minister who sired “Charlie’s Dance Band,” and see how the Goebbels vision of music and humor did in history’s long haul.