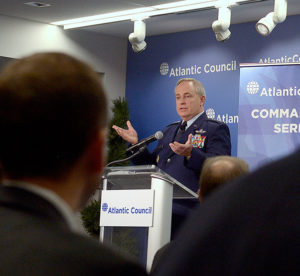 Air Force Chief of Staff Gen. Mark A. Welsh III speaks to an audience attending part of the Atlantic Council’s Commanders Series during a breakfast meeting in Washington, D.C., Dec. 1. During his comments, Welsh stated, “We’re not building an Air Force for ourselves. We’re building an Air Force to meet combatant commanders’ requirements.”

WASHINGTON–Air Force Chief of Staff Gen. Mark A. Welsh III spoke on the future of American airpower during a Dec. 1 event at the Atlantic Council in Washington, D.C.
The event was part of the Commanders Series, a preeminent platform for military and defense leaders to discuss strategic issues with an audience drawn from the community.
“Over the last 68 years, we have basically brought American airpower to all corners of the globe and I don’t anticipate that changing any time soon,” Welsh said. “The demand signal for airpower will continue to go up, it’s been going up for a long time now and it will continue to go up because our people bring great, great capability for the joint force.”
Welsh spoke for the need to modernize aircraft and infrastructure, not just to prepare for the conflict of the next few years, but 25 to 50 years in the future.
“We must modernize. Holding on to everything that made us great will not make us great in the future; it’s just a fact,” Welsh said. “It is important for us to understand before we think about that force of the future, that capability gap we have enjoyed here in the United States for years is closing and it is closing fast.
“If we don’t pay attention to this, airpower will no longer be an asymmetric advantage of the U.S. military. The impact of that could be catastrophic … The U.S. way of war will have to be adjusted.”
Welsh said every day is a good day being the Air Force chief of staff because he gets to stand with people he respects, and represent a force he loves and values while serving a nation he would die for.
“The only thing that personally keeps me awake at night is worrying about letting them down. That would kill me,” Welsh said. “I love the people in my Air Force. I just love them and if I felt I wasn’t working hard enough or I didn’t care enough or I let them down in some way, I wouldn’t sleep at all.”