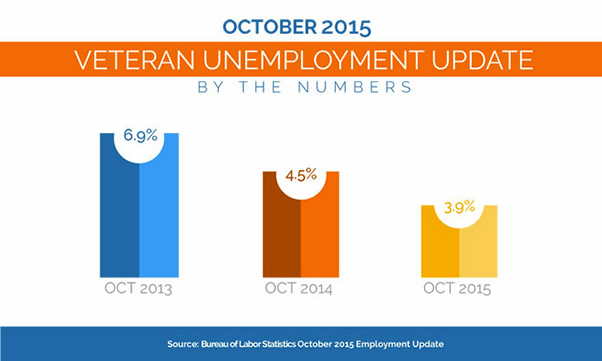 A concerted national effort to hire veterans, coupled with their sought-after essential skills training, likely had an effect on making October’s veteran unemployment rate the lowest since April 2008, a Defense Department official said Nov. 30.
Susan S. Kelly, who leads DOD’s Transition to Veterans Program Office, spoke to DOD News about the October Bureau of Labor Statistics Report published by the Labor Department, which indicated that veteran unemployment has been lower than the rate of nonveteran unemployment for 23 consecutive weeks. In October, the veteran unemployment rate stood at just 3.9 percent, while nonveteran unemployment was 5.4 percent.
Kelly said she believes the drop in veterans’ unemployment stems from several factors, such as the economic upturn across the country, as well as the many layers of effort in the public and private sectors to hire veterans.
In addition, she said, employers are seeking the professional “essential skills” ingrained in every veteran.
“Employers have been telling us the last 18 months, ‘We can train them in technical skills, but the [other skills] take years to develop,” Kelly said.
Those “essential skills” include leadership, ability to handle work stress, persistence, attention to detail, interpersonal skills, teamwork and team-building, oral and written communication, decision making, training people, supervising, critical thinking and project planning, she said, adding that the philosophy behind hiring veterans has evolved from the “right thing to do” to “the smart thing to do.”
“The heads of corporations say they spend millions of dollars every year teaching their managers leadership skills,” she said, and employers have learned that veterans arrive at the workplace already equipped with these skills.

Veteran hiring: A snowball effect
Not long ago, veteran unemployment among young veterans ranged in the double digits. When the White House’s Joining Forces initiative began in 2011, it called on all sectors of society to hire veterans and spouses and “opened avenues for veteran employment,” Kelly noted.
At DOD, with the help of several federal agencies, Kelly led the transformation of the Transition Assistance Program into weeklong, mandatory training for transitioning service members, giving them the skills and knowledge necessary to secure jobs, seek education and pursue optional training, such as how to start a business.
More federal agencies, corporations and nonprofit organizations joined the hiring effort and sought veterans for employment. For example, national retailer Wal-Mart launched the “Greenlight a Vet” campaign to shine a light on how veterans enrich communities and to encourage hiring veterans, who are known to take action quickly, show great leadership skills and “represent the best of America,” an organization statement noted.
Several organizations, including the Institute for Veterans and Military Families; Team Red, White and Blue; Team Rubicon; Blue Star Families; and the U.S. Chamber of Commerce’s Hiring Our Heroes program have also joined the effort.
“Each one brings us a unique contribution to veteran unemployment,” Kelly said.

Rand Corp. endorses veteran skillset
While it was understood veterans had strong work ethics and skills, Kelly said, those basics weren’t “codified” until DOD enlisted the Rand Corp. to study the combat arms profession — the field with the fewest technical skills transferrable to civilian employment.
Since Rand’s study this year, it has endorsed hiring veterans and illustrated how veterans’ essential skills line up “very well” with what the Labor Department, academia and economists named as necessary in the 21st century workforce, she said.
The professional standards taught to troops are an asset to the civilian workforce during a time when the nation is challenged to fill what Kelly calls “a gap in workforce skills.” She said that while DOD is “delighted” with the drop in veteran unemployment, the turnaround is an ongoing effort that is continually adapting to new lessons learned.
“We look at these skills as an asset for the workforce, but our veterans have an incredible amount of attributes that can be used in all aspects of community life,” Kelly said. “They can be leaders, and in [those] I meet, I tell them to run for public office, because our nation needs leaders, and they have what it takes … for the betterment of all of community life.”

The Battle of the Bulge