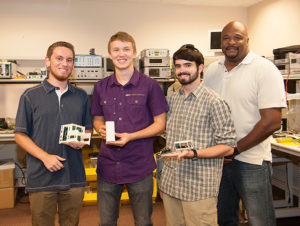 Future cell phones and other electronics could have batteries that charge in less than a minute. This new capability will be in part thanks to a space experiment using hard, flexible material as a clean power source.
That potential future is scheduled for launch on the Orbital ATK’s S.S. Deke Slayton II Cygnus spacecraft atop a United Launch Alliance Atlas V rocket Dec. 3.
A team of students attending Desert Christian School in Lancaster, Calif., with the support of NASA mentors and the University of California, Los Angeles, developed the experiment.
Three engineers from NASA Armstrong Flight Research Center on Edwards Air Force Base in California volunteered to assist the students and the funding for the experiment was provided by the center. Allen Parker oversaw the software team, Phil Hamory advised the engineering component and Craig Stephens assisted the public relations staff.
Another key figure is UCLA researcher Richard Kaner, who leads Kaner Laboratory. He has met with both teams of students from Desert Christian and provided the graphene materials and research.
The experiment is designed to see how graphene-based supercapacitors charge, discharge and deteriorate in a microgravity environment. The supercapacitors could offer the best of each with the fast charging of a capacitor, while having the slow power discharge of power like a battery, Stephens explained. In fact, the material is sandwiched between two lithium battery cases.
The advanced space battery may lead to a number of terrestrial uses from the mobile phone industry for charging cell phones to the transportation industry for running large refrigeration units more efficiently — and environmentally clean — for semi trucks, Stephens added. 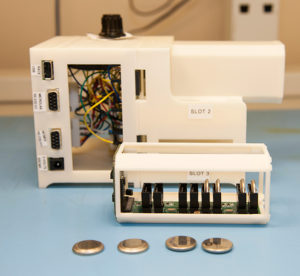 These are the components of the Desert Christian experiment launched to space Dec. 3 that could one day lead to fast-charging batteries.

Once International Space Station astronauts start the experiment, data collected will be e-mailed to the students every three days during the 30-day experiment.
It is the second attempt to transport the experiment to space. The first try was June 28 on a Space-X Falcon 9 rocket that was lost shortly after launch. However, the Desert Christian team and its mentors had foreseen the possibility of a challenge and the students created two identical experiments.
Trevor Sattler, who is a senior and was on the team during the formulation and construction of both experiments, remembers the disappointment of the first launch and loss of the experiment, but is happy to be a part of the two ongoing experiments.
“Life doesn’t always go perfectly,” he lamented. “It will be awesome if these experiments go well. We are using leading-edge technology with super simple methods well suited for our abilities. As a freshman (in high school) I never envisioned working on an experiment that would be transported into space.”
Sattler also has gained much from working on this project and said he hopes to apply for a NASA summer internship, as three of his former team members had done this past summer. Jonathan Lokos, Logan Francisco and Kyler Stephens were on the first Desert Christian team and had applied for and received internships at Armstrong.
“My work on this confirms to me that I want to be a mechanical engineer,” Sattler said. “I always liked seeing how things work and how to make them work better. It would be amazing if I had the opportunity to work at NASA Armstrong.”
Hannah Laubach, a junior on the engineering team, also has learned from the opportunity.
“It has been great to work with mentors and learn what it would be like on that career path,” she said.
The experiment consists of eight supercapacitors in a housing. Hamory explained that there are four each of the two types of supercapacitors. Every supercapacitor has a metal plate on each side, but it’s on the inside that counts. One set will include an acetonitrile material, while the other set will have an ionic liquid. In other words, the experiment will look at the effectiveness of different materials, Hamory explained. 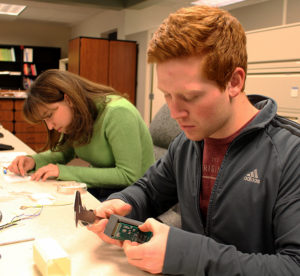 Hannah Laubach and Trevor Sattler work on elements of the Desert Christian experiment expected to launch to space in March 2016. It is a follow on to the components launched Dec. 3.

The students are preparing a second experiment, which will look at how the graphene supercapacitors work when heated to 140 degrees is applied. That experiment will be ready in January for an anticipated March launch, he said.
An example of some of the jobs the students do are soldering wires for electrical connections and attaching micro heaters that have less energy than a refrigerator light bulb, Hamory explained. The supercapacitors also are placed in a black material with insulation that essentially forms a “sleeping bag” to keep the supercapacitors warm. In addition, students designed and then printed a housing to contain all of the elements on a 3D printer, where the circuit board, gauges and wires also are integrated.
For the team at Desert Christian School, the future is about to be launched.