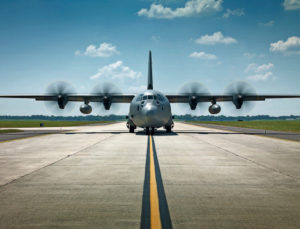 A £369 million contract to support the Royal Air Force’s (RAF) fleet of C-130 Hercules transport aircraft has been awarded to three companies by the Ministry of Defence.
The deal will see Marshall Aerospace and Defence Group, Lockheed Martin and Rolls-Royce, who jointly deliver the Hercules Integrated Operational Support, provide continued support for the C-130J fleet until 2022.
The three companies have been working together on the HIOS program since 2006 and more than a thousand jobs will be sustained by this additional investment. Most of the work will be undertaken by Marshall Aerospace and Defence Group at its Cambridge site with additional work on the AE 2100 engines carried out by Rolls-Royce in Bristol, Brize Norton and Indianapolis, U.S. Lockheed Martin Aeronautics, the Original Equipment Manufacturer of the C-130J Super Hercules, manages the HIOS supply chain with a UK team based in Havant, Hampshire, providing subcontract support for supply, IT and field technical support services.
Close collaboration between the MoD, RAF and industry has increased availability of the C-130 to carry troops, supplies and equipment in support of operations across the world by a third while also delivering cost savings of around 20 percent. This means the RAF now has more aircraft to support humanitarian operations such as the recent floods in Nepal, contingency operations like Op SHADER as well as routine supply missions to overseas bases. The recent Strategic Defence and Security Review announced that the C-130 aircraft will be upgraded and extended in service until 2030.
Earlier this month, the efforts of the joint C-130 team were recognized by Philip Dunne who presented them with a Minister for Defence Procurement Award during a ceremony at MoD Main Building.
Steve Fitz-Gerald, CEO of Marshall Aerospace and Defence Group, said: “It is a privilege to be part of the C-130J Joint Team and to have contributed to the achievements being recognized by the Minister (DP) Acquisition Award. Next year marks Marshall’s 50th anniversary of our first engagement with the RAF in support of its C-130 fleet and we look forward to continuing that partnership to provide the highest levels of availability, affordability and innovation.”
Stephen Ball, Chief Executive of Lockheed Martin UK said: “Over the last 60 years, Lockheed Martin has delivered 2,500 C-130 Hercules, capable of supporting 100 different mission requirements. This contract will ensure we are able to continue the good work recognized by the Minister’s procurement award and make RAF C-130s available to support a variety of missions in defense of the UK’s security.”
Chris Cholerton, Rolls-Royce President – Defence, said: “The HIOS contract has been a huge success since its inception in 2006, reducing operating costs for the customer while increasing levels of availability of one of the most important assets in the RAF’s inventory.  We are very proud of our role in ensuring that the C-130J is mission-ready and in helping the customer to achieve greater levels of capability and affordability.”