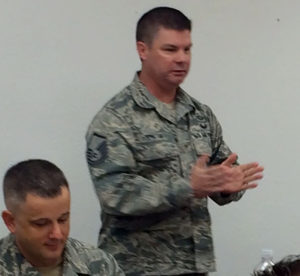 Airmen from Edwards Air Force Base remain deployed worldwide, supporting and performing missions in a global war on terror that shows no sign of ending.
Thousands of Air Force and civilian personnel work daily at the Air Force Test Center in support of an array of the most vital national security missions, such as the test program for the F-35 Lightning II joint strike fighter. But the Southern California base in the semi-remote Mojave Desert at any given time deploys a number of airmen about the size of an infantry company in a globe-girdling mission.
Airmen deployed from Edwards work assignments that can range from logistics and communications to base security. They serve in Afghanistan, in the Horn of Africa and South Korea, and other locations where their services are required in what is simply known by its mission-based acronym, GWOT, global war on terror.
“At any given time about 150 or so are deployed for months on end while their families are at Edwards,” Col. Col. David F. Radomski, 412th Test Wing vice commander, said.
Speaking to the Edwards Civilian and Military Support Group, Radomski said numbers of deployed airmen dipped for a bit, but are on the rise again with an increase in mission support worldwide.
“Many think the war in Iraq is ended so everybody is coming home, but that is absolutely not the case,” the colonel said.
Radomski participates with the Edwards Civilian Military Support Group, a 25-year old major civic community organization that gathers community leaders to work on projects in support of the Air Force Test Center. Among their activities, they hear about work by groups like Hearts Apart.
A variety of groups at Edwards, often spearheaded by senior non-commissioned officers, work to do anything they can to help families of the deployed, and lessen the impact of those deployments on spouses and children.
“If we need to, we will get over there and mow the lawn or work on their cars,” MSgt. Damian Spaits said in a recent presentation to the Civilian-Military Support Group.
Spaits is representative of an entire field of troops now serving in a military that has “gone purple.” It is neither Air Force or Navy blue, or Army and Marine Corps green. Spaits is an Air Force senior NCO who wears the coveted Ranger tab from the Army as well as the silver wings of a paratrooper and air assault badges, worn typically by Army troops from the 82nd or 101st Airborne Divisions.
On a monthly basis, Spaits shared that the NCOs from the Hearts Apart organization host a meal and a little bit of “ground intelligence” instruction for spouses and family members of airmen who are deployed or on a remote tour assignment.
Edwards is a Southern California base far enough in the environs of the Mojave Desert that it can simply be disorienting for arriving family members who learn they will drive an hour to the nearest community of any size.
So family support, and the events that help achieve that, are essential. Hearts Apart events, which always are served up with a meal, give spouses, partners and family members opportunity for face-to-face contact with Readiness Center staff, counselors, and the unit and base leadership of Edwards, which remains the world’s premier test facility for aircraft and the array of materiel and equipment that support the global commitments of the Air Force.
“We have found over time that food is very necessary at any event,” Spaits said.
Food with a family event is essential even if it is as simple as pizza, or the opportunity to serve something a little fancier.
“Everyone is running, taking care of their kids, picking them up and dropping them off, so the food is just something really necessary.”
Gift cards are also important, Spaits said. Families delight in them, but more to the point, they often use them, and sometimes need them to make ends meet while a loved one is deployed. The food and gift cards for this small 501(c)(3) non-profit are bought with donations and fundraising by the Hearts Apart organization.
“Today’s Air Force is the smallest since its founding in 1947,” Spaits told the Civilian Military Support Group. “Most families have endured multiple deployments,” he said.
The Hearts Apart program is one in an array that attempts to serve as bridge and support for families while their loved ones are deployed. Spaits cited a Pew Research Center 2011 study — “War and Sacrifice in the Post 9/11 Era” that concluded “the toll of increased deployments has been divorce and family strains that can lead to abuse.”
“We want to get ahead of that, and stay ahead of that,” Spaits said.
Getting ahead might be as simple as organizing a family bowling night, or as imaginative as sponsoring a massage night for stressed out mothers underwritten with gift cards and professional certified masseuses, and family support parties before Thanksgiving and Christmas.
Spaits shared some of the family “Thank You” notes to the Hearts Apart program, and they were fairly straightforward.
From one of the families, a simple note, “Thanks so much for all the support during this deployment,” one mother wrote. “The outings, phone calls and raffle gifts have been really uplifting … You make the Air Force feel like a big family. Many thanks and God Bless.”
Goals for the group are fairly modest. Expenses have been running around $5,000 a year, and the organization is developing its paperwork to become a formal nationally recognized non-profit. Danny Bazzell, a past president for the Civilian Military Support Group, said that Hearts Apart can flow non-profit, tax-deductible donations through the Civ-Mil Group until Hearts Apart is chartered.