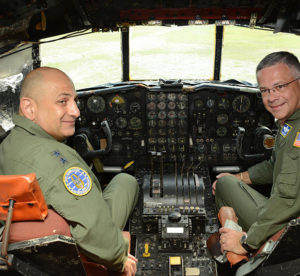 Maj. Gen. Richard S. “Beef” Haddad, left, and Col. Randal L. Bright get reacquainted with the cockpit of No. 55-0014, the AC-130A gunship they flew into combat in 1991. Haddad is vice commander of Air Force Reserve Command, while Bright serves as chief of the plans division in the Air Force Reserve Command Directorate of Plans and Programs at Robins Air Force Base, Ga.

More than 20 years after two Air Force Reserve Command leaders flew into combat together over the “Highway of Death” in Iraq, they were reunited with the aircraft that took them on the mission.
Maj. Gen. Richard S. “Beef” Haddad and Col. Randal L. Bright boarded the AC-130A gunship — No. 55-0014 — again June 12, 2014, at the Museum of Aviation at Robins Air Force Base, Georgia, where the aircraft is on display for the public to see. Robins is also home of Headquarters Air Force Reserve Command.
On Feb. 26, 1991, Haddad, then a captain, and Bright, a first lieutenant — both members of the 711th Special Operations Squadron at Duke Field, Florida — were assigned to a mission over a road connecting Kuwait City to Baghdad. In August of the previous year, Iraqi soldiers had invaded Kuwait, sparking a chain of events that soon led to the U.S. sending military members to Saudi Arabia as part of Operation Desert Shield/Storm. The 711th SOS was part of these operations. The road was crowded with Iraqi military vehicles exiting Kuwait and going back to Iraq.
Two other reservists, Maj. Michael N. Wilson and Maj. Clay McCutchan, piloted the lead aircraft as the 711th SOS raced to stop Iraqi forces fleeing from Kuwait to Iraq. Wilson and McCutchan determined that they did not have enough fuel to successfully execute the mission. As a result, they radioed Haddad and implored him to “hurry up” and “get up here.”
While en route, Haddad noticed that his aircraft’s autopilot feature was not working. Without the autopilot, Haddad and his co-pilot, Bright, faced a greater challenge than they had anticipated because they relied upon the autopilot’s altitude-hold function to keep the aircraft at a fixed altitude while they banked and fired the gunship’s weapons.
To compensate, Haddad had to manually control the ailerons to turn the aircraft while also firing the guns. Bright, facing an equally challenging task, crouched down in his seat in order to work the aircraft’s throttles and yoke simultaneously to maintain a fixed altitude. Working in tandem to complete the mission, Haddad, Bright and the rest of the reservists aboard the aircraft remained on station, firing their weapons with little resistance — a situation that quickly changed. 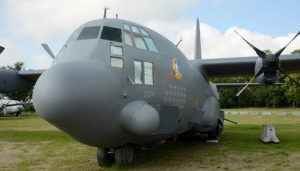 Aircraft No. 55-0014 looks less menacing on display at the Museum of Aviation at Robins Air Force Base, Ga., than it did over the “Highway of Death” during the Gulf War. On the night of Feb. 26, 1991, the crew of the AC-130A gunship was credited with destroying at least 20 enemy trucks and four armored personnel carriers.

As they began to leave the “killbox,” Haddad and company discovered that their efforts had not gone unnoticed. As they headed south, Master Sgt. Don Dew, the illuminator operator, excitedly yelled “missile launch” over the radio. In response, Haddad increased power and put the aircraft in a dive while Capt. Jose Davidson, the aircraft’s navigator, released flares to counter the missile. Unaware of the navigator’s actions, Haddad and Bright, hearing the noise and seeing the light produced by the flare, believed their aircraft had been hit.
“My hands were gripping the throttles, thinking we were going down,” Haddad said.
After seeing more flashes, Haddad and Bright realized that they were in no danger.
The significance of the mission they participated in that night was not immediately apparent to Haddad and his crew. However, the stretch of road that they had fired on quickly became known as the “Highway of Death” due to the enormity of the destruction caused that night.
While the exact number of casualties remains unknown, the attack destroyed an estimated 1,400 to 2,000 vehicles. Haddad, Bright and the crew destroyed at least 20 enemy trucks and four armored personnel carriers. They received the Air Medal for their actions that night.
More than two decades after Operation Desert Storm, Haddad, who now serves as vice commander of AFRC, and Bright, chief of the Plans Division in the Directorate of Plans and Programs at Headquarters AFRC, reflected on that eventful night in early 1991.
“It was an exciting time for me and the other members of my crew,” Haddad said. “That experience helped me go to war in the future as we went to OIF (Operation Iraqi Freedom) and OEF (Operation Enduring Freedom). It helped in terms of realizing the risks and what it was like to be a crew member going into that kind of environment.”
Like Haddad, Bright maintained that the night had a lasting impact on him and his career because it “was always something I could hang my hat on. As a youngster in the Air Force, I had seen combat.”