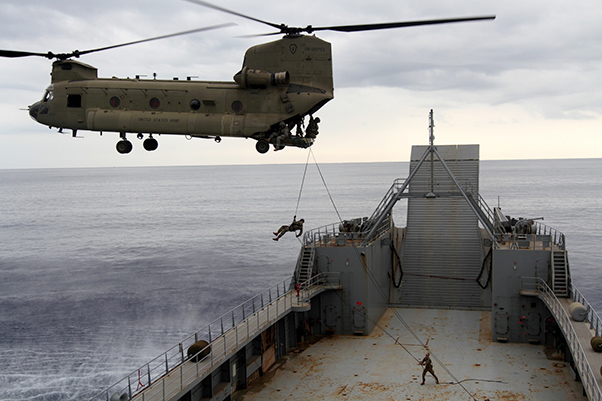 Exercising their joint capabilities, 8th Theater Sustainment Command, or TSC, mariners partnered with 25th Infantry Division’s Lightning Academy soldiers and Heavy Marine Helicopter Squadron 463 pilots during inset and extract training off the shore of Oahu, Hawaii, Jan. 11-12.
This training included standard rappelling, Fast Rope Insertion Extraction System, or FRIES, and Special Patrol Infiltration Exfiltration System, or SPIES, aboard the deck of 8th TSC’s Logistical Support Vessel-2, CW3 Harold C. Clinger, before heading back to the island.
“This simulates a couple of things,” said Chief Warrant Officer 3 Abdelkader Hosni, the LSV-2 vessel master, 625th Transportation Detachment, 8th TSC. “We can recover a seized vessel by FRIES or come assist a crew during a disaster situation.”
“It can be used in different scenarios,” Hosni said. “Today is just a simulation of what we can do with this kind of action.”
The first day of training involved two teams of Soldiers using a CH-47 Chinook to board the vessel via rappelling and leave using the SPIES method since the helicopter was unable to land on the vessel. On the second day, the first team inset using FRIES out of a U.S. Marine Corps Sikorsky CH-53E Super Stallion, which flew from off the coast of Marine Corps Base Hawaii.
The fast rope method involves service members sliding down a heavy rope with their hands and feet; rappelling allows soldiers to use a harness and thinner rope to steady themselves and control their speed, but takes much longer.
Hosni stated this kind of training benefits both the boat crew and the air assault school.
“In addition to doing our core competencies and transporting cargo throughout the Pacific in missions, like Pathways or interisland — where we support Army units and other sister-services — today we’re doing something unique and different, where we’re going to do some helo ops with the Lightning Academy and U.S. Marine Corps,” Hosni said. 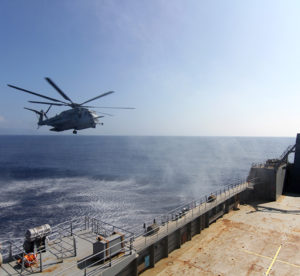 A Sikorsky CH-53E Super Stallion, from Marine Corps Base Hawaii, flies toward the deck of the Logistical Support Vessel-2, the CW3 Harold C. Clinger, to conduct air assault operations off the coast of Honolulu.

“We support units to train on their competencies, and we train on our competencies as well,” Hosni added.
Due to their location in the Pacific region, many operations require more than one service to accomplish their missions, Hosni added.
“In the Pacific, and in the Army in general, we are enforcing and we are big advocates of joint operations,” Hosni said. “Joint operations is now and is the future, so working with the Marine Corps is just adding that piece to the puzzle and making sure we have interoperability amongst the services.”
The LSV is a unique, self-sustaining vessel with a shallow draft enabling it to dock at almost any shore, giving it maneuverability and accessibility to disaster areas for humanitarian relief and humanitarian assistance.
“By doing this training we were able to coordinate with Lightning Academy, and they offered to lift some of our guys over land and do SPIES with them,” Hosni said. “That’s great for these young soldiers to see another aspect of the Army.”