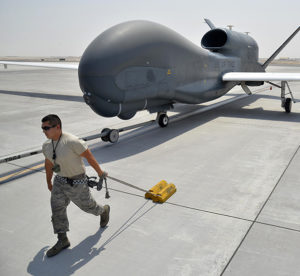 An airman pulls a set of chalks while escorting a RQ-4 Global Hawk back to a hangar during ground operations at an undisclosed location in Southwest Asia Sept. 18, 2015. The Global Hawk block 20 aircraft carry the Battlefield Airborne Communication Node payload, which ensures connectivity for war fighters. The BACN system, managed out of Hanscom Air Force Base, Mass., recently achieved 100,000 combat flight hours.

A program managed at Hanscom Air Force Base, Mass., to ensure war fighters can stay connected despite differing networks and austere environments recently reached a significant milestone and is also on a path to keep moving forward.

BACN began as an Advanced Concept Technology Demonstration in 2006 to meet the challenges associated with operating in mountainous regions with limited line-of-sight, and in 2009 became a Joint Urgent Operational Need program to support Operation Enduring Freedom. It currently operates on two airborne platforms: one manned, the E-11A aircraft; and one remotely piloted, the Global Hawk Block 20s.
According to program officials, BACN provides the warfighter a high-altitude relay, providing reliable, dynamic communication links. Its myriad abilities include: an extended range of voice and tactical data networks; data exchange and translation across TDNs using various message standards and systems; voice communications interoperability between disparate radio systems; and unification of separate TDNs into a seamless, larger network.

The group operating the system in theater realizes the benefits BACN provides.

“BACN has been instrumental in extending communications and enhancing situational awareness throughout Afghanistan,” said the contracting officer’s representative for the 430th Expeditionary Electronic Combat Squadron. “The missions range from support for troops in contact to enabling strikes against key targets. BACN is a key part of the C2 backbone.”

They also realize the significance of the milestone.

“The entire team in country is proud to have contributed to passing the 100,000-hour milestone for the BACN program,” said the 430th EECS commander. “Having the E-11As overhead on a 24/7 basis has provided important radio bridges and datalink extensions to the warfighters on the ground and in the air. We are happy that we can support the ongoing efforts of the entire Freedom’s Sentinel and Resolute Support missions.”

And the program office is working to ensure this support can continue. In December, they released a notice of contract action. They intend to award a sole source follow-on contract for operations and support to Northrop Grumman Corp. for operating and maintaining the BACN system payloads. The work is expected to begin in January 2017 and may continue through January 2021 in optioned intervals of no more than 12 months each. Work will include continued payload operations and maintenance, periodic software upgrades and providing spares and repair parts.

“Achieving 100,000 combat flight hours for a program with JUON origins is an incredible milestone which highlights the importance of this capability,” Olson said. “BACN has become a true force multiplier, and it is laying the foundation for the future of aerial layer networking. The BACN team and I are excited about the future of the program and we are ready to support this war fighter requirement for as long as it’s needed.”

Editor’s note: Names from expeditionary units were not included for security reasons.