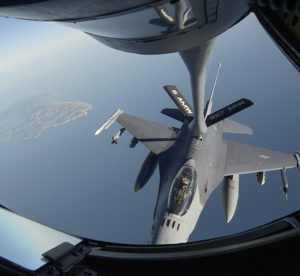 A KC-135 Stratotanker, assigned to the 63rd Air Refueling Squadron at MacDill Air Force Base, Fla., refuels an F-16 Fighting Falcon, assigned to the 480th Expeditionary Fighter Squadron at Spangdahlem Air Base, Germany, during a flying training deployment at Souda Bay, Greece, Feb. 2, 2016. The 63rd ARS operated out of Souda Bay Naval Air Station for the duration of the flying training deployment.

The first time the Air Force attempted to refuel an aircraft in flight, aircrews successfully stayed aloft for 151 hours. That was over 85 years ago, and the Air Force today has made quite a few innovations since then.

A KC-135 Stratotanker assigned to the 63rd Air Refueling Squadron at MacDill Air Force Base, Fla., is providing air refueling support to the F-16 Fighting Falcons assigned to the 480th Expeditionary Fighter Squadron over the skies of Souda Bay, Greece, during a flying training deployment slated for Jan. 22 to Feb. 15.

“The tanker plays a huge role in what we do to meet any sortie tasking that we could have,” said Lt. Col. Timothy Murphy, the 480th EFS commander. “We can simulate the same length of sorties here that we could have if we were in combat.”

“This is a training mission that we are doing here supporting their (flying training deployment),” said Capt. Shannon Callon, a KC-135 Stratotanker pilot assigned to the 63rd ARS. “We provide a stable platform of fuel to all of the American receivers.”

The Stratotanker can deliver 1,000 gallons of fuel per minute, carry up to 200,000 pounds of fuel, 83,000 pounds of cargo and provide air refueling services to all branches of service, NATO and allied partners.

“As the boom operator, I’m the in-flight refueler in the back of the jet being the one who’s actually controlling the boom and passing the fuel to the receivers,” said Staff Sgt. Brittany Bahnet, a KC-135 Stratotanker boom operator assigned to the 63rd ARS. “Our job also includes cargo, passengers and backing up pilots when we’re in the cockpit.

“I love it,” Bahnet continued. “It’s very exciting, it’s one of those jobs that not a lot of people could ever say they do or experience; definitely better than being behind a desk.”

The KC-135 has flown with the U.S. and Hellenic air forces each day and provided air refueling over the Greek ranges on the northwest bay of Crete, White Mountain range and over the Mediterranean Sea.

“They have been there to support us the whole time, it’s great,” Murphy said. “Their tanker crews have been awesome from the boomers to the pilots. Overall, this is really good training for everyone.”

The flying training deployments are made possible through the efforts of U.S. Air Forces in Europe-Air Forces Africa, the command which governs all U.S. air assets in Europe with the duty to train, equip and deploy combat-ready airmen. Their posture is to continuously hone skills during peacetime, address any security threats, and ensure regional peace and stability.