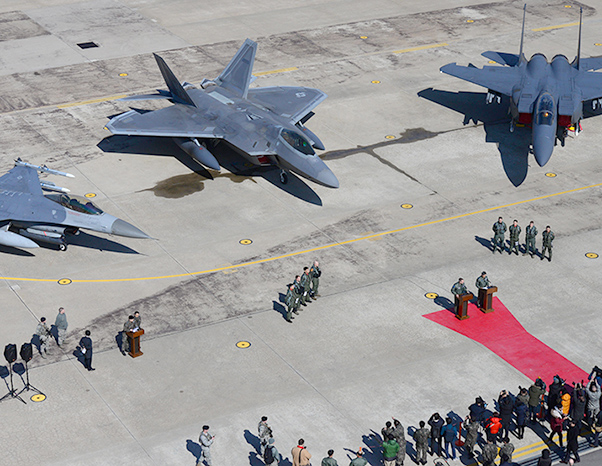 A U.S. Air Force F-22 Raptor from Kadena Air Base, Japan, is flanked by an F-16 Fighting Falcon and a South Korean air force F-15K Slam Eagle at Osan Air Base, South Korea, Feb. 17, 2016. The Raptor was part of a flyover formation of 12 aircraft demonstrating the strength of the U.S.-South Korea alliance in response to recent provocative actions by North Korea.

“The F-22 Raptor is the most capable air superiority fighter in the world, and it represents one of many capabilities available for the defense of this great nation. The U.S. maintains an ironclad commitment to the defense of the Republic of Korea,” Lt. Gen. Terrence O’Shaughnessy, the United Nations Command Korea and U.S. Forces Korea deputy commander and U.S. 7th Air Force commander, told reporters. 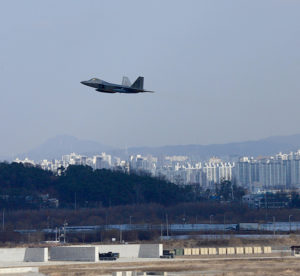 A U.S. Air Force F-22 Raptor from Kadena Air Base, Japan, conducted a flyover in the vicinity of Osan Air Base, South Korea, in response to recent provocative action by North Korea Feb. 17, 2016. Four Raptors were joined by South Korean F-15K Slam Eagles and U.S. Air Force F-16 Fighting Falcons. The F-22 is designed to project air dominance rapidly and at great distances and currently cannot be matched by any known or projected fighter aircraft.

“The ROK and U.S. combined air forces remain ready to deter North Korean threats, and are postured to defeat them with the strength of our combined air combat capability,” Lee said.

“The combined nature of this flyover highlighted the high level of integration and interoperability between our two air forces, developed through decades of combined training,” Evans said.

“Furthermore, the inclusion of F-22s, and a B-52 in January, demonstrated the firm resolve of all (U.S.) forces as we stand united with our counterparts from the ROK air force,” he added.

The mission demonstrated the strength of the alliance between the U.S. and South Korea and the resolve of both nations to maintain stability on the Korean Peninsula. 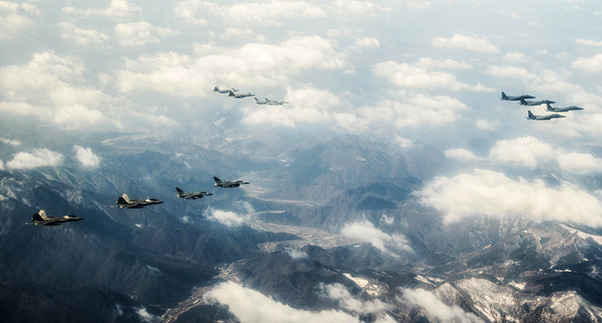