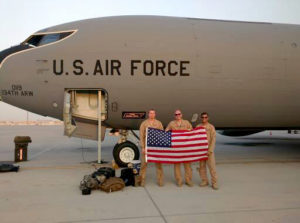 A KC-135 Stratotanker crew from McConnell Air Force Base, Kansas, saved an F-16 Fighting Falcon pilot from ejecting over Islamic State of Iraq and the Levant-held territory in 2015, which could have resulted in the Airman’s captivity or death.

While deployed in support of Operation Inherent Resolve, the crew responded to an F-16 fuel emergency and escorted the aircraft from ISIL territory to allied airspace.

“We were in the area of responsibility and were already mated with some A-10 Thunderbolt IIs that were tasked with observing and providing close air support for our allies on the ground,” said Capt. Nathanial Beer, a 384th Air Refueling Squadron pilot. “The lead F-16 came up first and then had a pressure disconnect after about 500 pounds of fuel. We were expecting to offload about 2,500 pounds.”

After the F-16 disconnected a second time, the pilot went through his checklists and told the crew he had a fuel system emergency. Over 80 percent of his total fuel capability was trapped and unusable.

The F-16 could only use up to 15 minutes of fuel at a time, so the crew escorted the aircraft to its base while refueling every 15 minutes to avoid an emergency.

“The first thought I had from reading the note from the deployed location was extreme pride for the crew in how they handled the emergency,” said Lt. Col. Eric Hallberg, the 384th ARS commander. “Knowing the risks to their own safety, they put the life of the F-16 pilot first and made what could’ve been an international tragedy a feel-good news story. I’m sure they think it was not a big deal, however, that’s because they never want the glory or fame.”

Even after the crew escorted the F-16 back, they completed the rest of their daily missions, achieving 100 percent success.

“In my thoughts, what motivates them is a higher calling to be the best at the mission and take care of their fellow soldiers, sailors and airmen,” the commander said.

Tankers like the KC-135 have made it possible to extend the range and persistence of Operation Inherent Resolve air operations, enabling coalition aircraft to maintain a 24/7 presence.