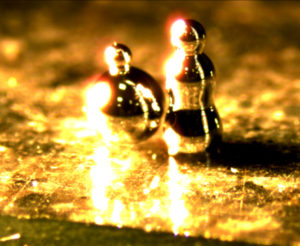 The enabling attributes of Gallium Liquid Metal Alloys (GaLMAs) make them ideal for 3D freestanding liquid metal structures, as demonstrated by these GaLMA “snowmen.” These structures can lead to the development of three-dimensional circuitry.

Electronic circuits and antennas for integral Air Force systems and tasks could one day receive a boost in effectiveness, thanks to the research and development of Gallium Liquid Metal Alloys (GaLMAs) underway at the Air Force Research Laboratory.

GaLMAs are composed of the liquid metal, gallium, and other conductive metals.  They are being researched at AFRL for potential use with various radio frequency (RF) electronics systems. Their lightweight, reconfigurable formats could be beneficial to platforms that are constrained by size, weight, and power, ultimately lengthening flight durations, boasting payload capabilities, and reducing aerodynamic drag caused by traditional RF structures on aircraft.

“Gallium is an elemental metal, like copper, gold, and silver,” explains Christopher Tabor, principal investigator and program manager for the AFRL GaLMA effort.  “It has an extremely low melting point for metals at 30 degrees Celsius (86 degrees Fahrenheit) and unlike mercury, which is the most commonly thought of liquid metal, gallium is non-toxic.”

When gallium is combined with other metals, such as indium, the newly-formed alloy’s melting point becomes lower than either element by itself, which can be as low as minus 19 Celsius (minus 2 degrees Fahrenheit). A gallium alloy material system is intriguing and potentially useful because the enabling attributes of its liquid state makes it easily reconfigurable. 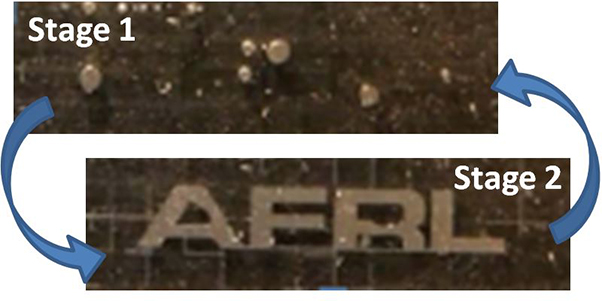 AFRL researchers recently demonstrated the malleability of Gallium Liquid Metal Alloys (GaLMAs). The GaLMA in Stage 1 is balled up. Stage 2 shows this GaLMA has been combined and flattened into the form of the Air Force Research Laboratory’s logo.

This project is a collaborative team effort of AFRL’s Manufacturing & Materials, Sensors, and Aerospace Systems Directorates. They have been researching the potential of GaLMAs for three years, and Tabor believes the technology is still about 5-10 years away from any real-world testing.

“Fluid electronics such as GaLMAs are a novel approach and a different paradigm than traditional RF electronics,” states Tabor. “A major hurdle to the technology is finding ways to integrate them with conventional semiconductor-based technologies.”

Another challenge to implementing GaLMAs is ensuring their longevity of use by maintaining their proper placement and regulating interactions with various surfaces that may negate their effectiveness.

Nonetheless, GaLMAs could offer an exciting array of possibilities for Air Force applications. Most notably, it could allow antenna and electrical connections to be physically mobilized and rearranged so that the shape and function of these components could be rewired and rewritten to suit mission requirements. Both basic communication and larger, more robust intelligence, surveillance, and reconnaissance applications could benefit. Using GaLMAs for RF electronics could also have cost-saving implications since the same system is used to perform these varied functions for varied missions.