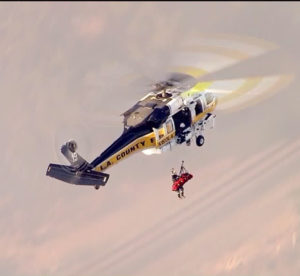 In a dramatic rescue, the County of Los Angeles Fire Department Aviation Unit hoists the driver from the crash site in a Sikorsky S-70A Firehawk.

In a dramatic rescue and firefighting mission on Aug. 14, 2015, members of the Air Operations team, flying a Sikorsky S-70A Firehawk, extinguished a substantial brush fire. The blaze erupted after a pick-up truck veered off a freeway, tumbled down an embankment, and burst into flames in Simi Valley, a suburb close to Los Angeles.

A rescuer, lowered by hoist, located and recovered the injured driver who had crawled up a water drain pipe to escape the flames. The crew flew the victim to a nearby hospital, where a full recovery was made.

“Our founder, Igor Sikorsky, envisioned the helicopter as a life-saving tool,” said Nathalie Previte, Sikorsky vice president, Sales & Marketing. “LA County is on the front lines each and every day as custodians of Igor’s vision, meeting the critical demands of search and rescue in firefighting missions.”

The S-70A Firehawk is a variant of the Sikorsky Black Hawk designed for firefighting, medical evacuation, and personnel transport. In 1957, the County of Los Angeles Fire Department became the first municipal organization to put a helicopter designed for firefighting into service. The County of Los Angeles Fire Department Aviation Unit currently has eight operational helicopters in their fleet, three of which are Sikorsky S-70A Firehawks.