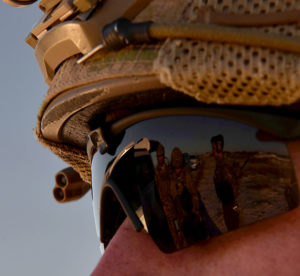 Although the U.S. Air Force separated from the U.S. Army, Sept. 18, 1947, the two forces have a long history of working together to dominate the sky and ground in combat.

Two F-35As teamed up with the 3rd Battalion to provide air support against simulated hostile targets in close proximity to the Rangers. One of the capabilities of the F-35 is to provide support to ground forces, to include Joint Terminal Attack Controllers and Joint Fire Observers.

“[This] was the first time these guys have worked with the F-35A,” said Maj. Christopher Collins, a pilot in the 33rd Operations Support Squadron. “It was a great opportunity to share tactics and showcase some of the unique capabilities we have with this jet.”
In a close air support mission, U.S. Army Rangers are responsible for setting up and operating communications systems to encode and decode messages, assist in the preparation of fire support plans with target coordinates, operate laser range finders and target devices and determine target locations using computers or manual calculations. 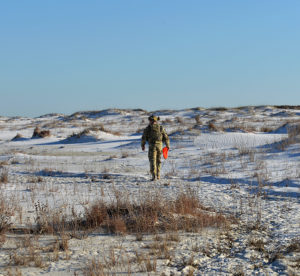 An Army Ranger from the 3rd Ranger Battalion, 75th Ranger Regiment, carries a flag to signal their position to friendly aircraft on Santa Rosa Island, Fla., Feb. 11, 2016. The regiment exercised close air support with the F-35A Lightning II on Eglin Air Force Base and Hurlburt Field.

For the Rangers, this exercise allowed them to familiarize themselves with the F-35A and how it can support ground troops in a deployed environment in the future.

“It’s important for a special operations task force to understand the capabilities of assets available and how they can be employed prior to arriving in theater,” said a 3rd Ranger Battalion Soldier. “This [exercise] will maximize the effectiveness of the aircraft and our task force when it goes into active service. Additionally it allows us to provide intelligent feedback to senior leadership on what will make the plane more effective in CAS mission set.”

After the exercise, Collins reiterated the importance of training in a joint environment to maximize the capabilities of the joint force.

“It really shouldn’t matter which aircraft [or] branch of service is acting as the controlling party,” said Collins. “The common guidelines of the joint doctrine allow us to operate seamlessly across a broad spectrum of different scenarios in the safest, most efficient manner.”

The soldiers said the exercise was successful because it allowed them to test the capabilities and limitations of the jet as a part of their mission set.

“The F-35 was designed to fight in a different environment, specifically an environment we could face if hostilities broke out in another portion of the world. Assuming we would be among the first there, this would be critical information,” said a U.S. Army Ranger. “Along with that, we learned what other assets and capabilities we would need to augment the F-35 on our current missions to meet our commander’s intent.”

As the F-35 progresses to initial operational capabilities, the aircraft and its airmen continue train to execute suppression and destruction of enemy air defenses, air interdiction missions and basic close air support.