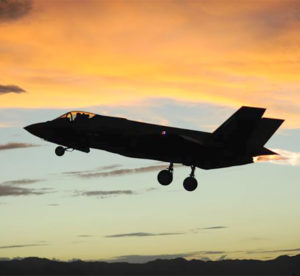 An F-35 Lightning II assigned to the 61st Fighter Squadron at Luke Air Force Base, Ariz., takes off as the sun sets. Corrosion testing of the F135 engine, the afterburning turbofan developed for the F-35 Lighting II, is undergoing testing at AEDC to see how it performs in the corrosive sea-air environment.

Corrosion testing of the F135 engine, the afterburning turbofan developed for the F-35 Lighting II Joint Strike Fighter, is being performed in one of the sea level test cells at Arnold Engineering Development Complex, Arnold Air Force Base, Tenn.

According to AEDC Aeropropulsion Test Branch deputy director Mike Dent, the F135 engine is undergoing propulsion testing in the SL-3 test facility to see how it performs in the corrosive sea-air environment.

“During this type of test, we simulate sea air by mixing a brine solution into the ambient air supply,” he said. “The F135 is then run through simulated sorties and on-deck tie down exposure.” 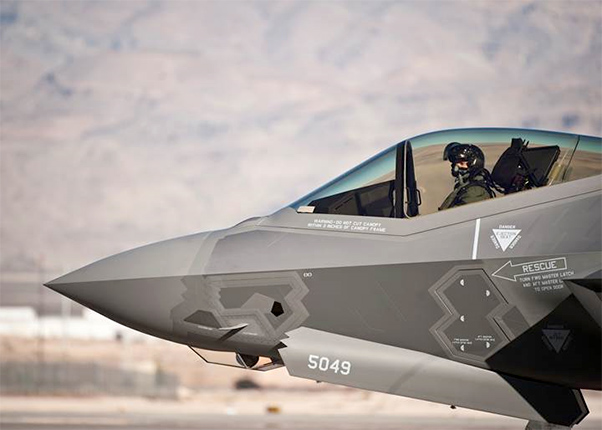 Capt. Brent Golden taxies an F-35A Lightning II at Nellis Air Force Base, Nev. The F135 engine, the afterburning turbofan developed for the F-35 Lighting II, is undergoing corrosion testing at AEDC to see how it performs in the sea-air environment. All-weather testing of the aircraft was conducted at McKinley Climatic Laboratory, Eglin AFB, Fla., last year.

After running the engine for an extended period, an inspection is performed on the engine and the testing process is then repeated.

According to Dent, the goal of corrosion testing on the engine is to assist in preparing the F-35 fleet for Naval operational deployment.