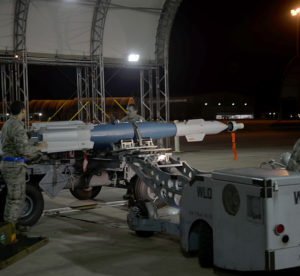 58th Aircraft Maintenance Unit weapons load crew members secure a GBU-12 to a jammer for transport to an F-35A Lightning II in the early morning March 3, 2016, at Eglin Air Force Base, Fla. This is the first time Airmen from the 33rd Fighter Wing loaded the munition into the F-35A for a weapons drop.

Airmen from the 58th Aircraft Maintenance Unit weapons section loaded the guided munitions in preparation for pilots to launch them from the F-35A later that day.

“For us weapons loaders it’s a really exciting moment for us all, this is what we’re trained to do” said TSgt. Robert Beltran, 58th AMU weapons expediter. “We’ve looked forward to doing this for a long time.”

The weapons drop was originally scheduled for late spring of this year, but innovation and persistence from 33rd FW pilots and maintainers allowed for an earlier launch of the munitions.

“There was a lot of work that went into making this weapons drop happen,” said Lt. Col. Brad Bashore, 58th Fighter Squadron commander. “We had some sharp folks from the squadron and the maintenance side who put their heads together to make the modifications and the funding come together for this drop to happen safely and ahead of schedule.”

Until March 3, the launch of munitions from the aircraft was simulated.

This milestone marks the first load and release of GBU-12s for the 33rd FW F-35A, but the weapons load crews honed their skills daily and in quarterly load crew competitions in preparation for this milestone.

“We just want to provide our pilots with a safe, reliable aircraft, so they can get their mission done,” said Beltran.

As the Air Force advances to initial operational capability for the F-35A in late 2016, the lessons learned at the 33rd FW will continue to shape the training of the airmen who maintain and pilot the aircraft.