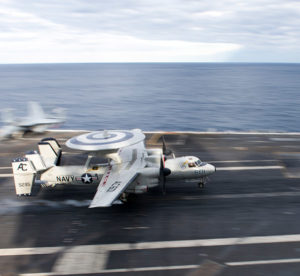 Eight sailors aboard the Norfolk, Va.,-based aircraft carrier USS Dwight D. Eisenhower (CVN 69) were injured March 18 when an arresting gear parted during a routine landing by an E-2C Hawkeye aircraft.

There were no fatalities and the sailors are listed in stable condition with non-life-threatening injuries.

The injured sailors were working on the flight deck at the time of the mishap. Six have been transported to Norfolk Sentara General Hospital for treatment. Two remain aboard IKE.

The names of the injured personnel will not be released. Their families are being (have been) notified.

The aircraft regained flight and returned safely to its base at Norfolk Naval Station Chambers Field. Initial reports are the aircraft was not damaged and no aircrew members were injured.

The ship is off the Virginia coast conducting carrier qualifications for Composite Training Unit and Joint Task Force Exercises (COMPTUEX/JTFEX) in preparation for their upcoming deployment.

An investigation is underway to determine the cause.