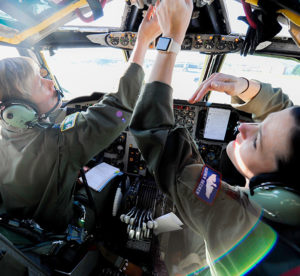 In honor of Women’s History Month, missileers based out of Minot Air Force Base, N.D.; F.E. Warren AFB, Wyo.; and Malmstrom AFB, Mont., completed a 24-hour alert shift to sustain an active alert status of the nation’s ICBM force.

“The goal of this day was to highlight all the women who worked hard to make a difference in public service and government jobs in the past,” said Col. Stacy Huser, the 91st Missile Wing Operations Group commander at Minot AFB. “We honored those women who have worked to gain opportunities and disavow stereotypes when they began their careers. This day was our tribute to them, as well as to inspire future generations of women to work in public service.”

According to the U.S. Census Bureau, women make up almost 51 percent of the nation’s population. Women currently make up 19 percent of the Air Force, the highest percentage of any service.

“The fact that we can look across our pre-departure briefing room and see a woman sitting in every seat, for every combat crew going out on nuclear alert, is in itself, significant,” said Col. Tom Wilcox, the 341st Missile Wing commander at Malmstrom AFB. “Not because Team Malmstrom is fielding an all-women alert force, but because we have enough women filling combat leadership roles to take alert for the entire wing.” 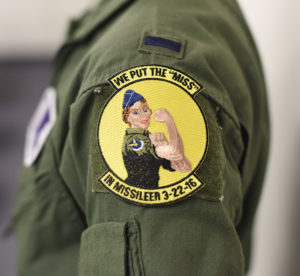 A missileer from Malmstrom Air Force Base, Mont., presents her patch after a training session at the missile procedures trainer March 21, 2016. According to the U.S. Census Bureau, women make up almost 51 percent of the nation’s population. Women currently make up 19 percent of the Air Force, the highest of any service.

“It is an honor to be flying with these women today,” said Col. Kristin E. Goodwin, the 2nd Bomb Wing commander at Barksdale AFB. “These two flights, launched and crewed only by women, serve as a source of pride for the whole 2nd Bomb Wing, Air Force Global Strike Command, and for each and every American.”

Goodwin flew as aircraft commander for one of the B-52s alongside six other women. In total, 14 women whose ranks range from lieutenant to colonel flew in the bomber formation, serving in the roles of pilot, weapons system officer and electronic warfare officer.

“To carry on the legacy of women in the Air Force is very special to me,” said 1st Lt. Elizabeth Guidara, the 12th Missile Squadron combat crew deputy director at Malmstrom AFB. “Not being afraid to take risks and taking ahold of those opportunities that present themselves are two things that I’ve learned to live by throughout my career.”

Col. Todd Sauls, the 90th Operations Group commander, said he was proud of the diversity in his F.E. Warren unit and excited to see the alert mission come together. 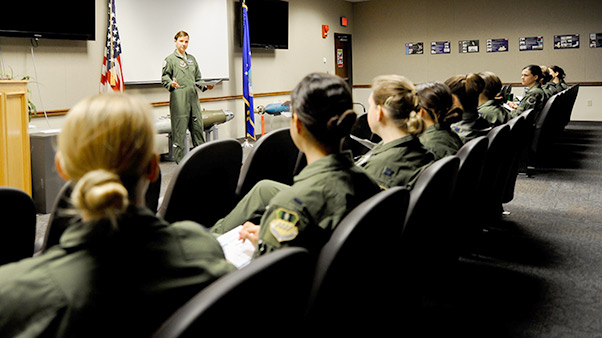 “When I was a second lieutenant, you would have 10 or so female missileers in an ops group and now we come close to deploying a whole female crew force just because of the numbers we have,” Sauls said. “This is about history and heritage and having events like this is a good way to honor the people who came before us.”

First Lt. Kelly Gorham, a 320th Missile Squadron missile combat crew commander, said she never really thought of herself as a woman in the military.
“I’ve just been an airman,” Gorham said. “(But) we are women, we are in the military and we’re doing good things. Sometimes the rewards are masked by that routine, but once you stand back and see that your family can sleep at night, see that your friends can sleep at night and the rest of the United States can sleep because you’re standing alert, that’s really the greatest reward you can ask for.”