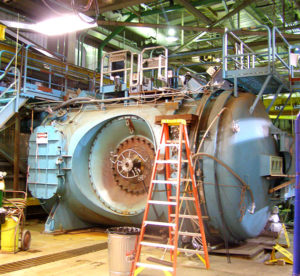 The above photographs show a before and after composite of the H2 test cell. In addition to the heater upgrade and other improvements, a new coat of paint was applied to the test cell.

In light of current and future Department of Defense testing needs for long-range strike and hypersonic vehicle materials development, a facility upgrade for the H2 arc heater at the Arnold Engineering Development Complex has been funded.

As part of the upgrade, a state-of-the-art segmented heater is being placed in the H2 arc tunnel to replace the vintage Huels heater from the 1960s.

Arc heaters meet this need by providing an efficient source for heating simulations, with realistic run times that are consistent with the time of many hypersonic flight missions.

The H2 arc tunnel was built from 1986 to 1988 as part of the Air Force consolidation of arc facilities at AEDC. It is one of three arc tunnels currently in use at the Complex.

“At the time H2 was built, AEDC was operating a similar Huels heater in atmospheric freejet mode, as well as the high performance H1 segmented heater which had been developed at AEDC and is still in use today,” said Mark Smith, an ATA facilities technology engineer with the AEDC Facilities Technology Branch. “Major components of the legacy 50-megawatt arc tunnel at Wright-Patterson Air Force Base, such as nozzles and diffuser sections, were relocated from Ohio. The facility test cell, model positioner system and air cooler were new designs fabricated expressly for the H2 installation at AEDC. Those components continue to be used today and will be a part of the upgraded Mid-Pressure Arc Heater facility.” 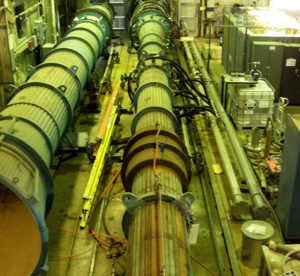 Above is a photograph from 2010 of the diffuser that connects the H2 test cell to the exhauster system. The diffuser modifications were completed in the AEDC Model Shop, and installation of the new diffuser began in January.

“These tests could only have been conducted in the H2 test facility because of its unique capabilities,” Smith said. “Since 2005, H2 has been one of the most active arc heater test facilities at AEDC, and to date has accrued the highest total number of arc-on minutes of any of the AEDC arcs.”

The heater upgrade is being carried out to address an existing deficiency in the test capabilities provided by the national arc heater assets at AEDC and NASA. The upgraded H2 will provide temperature test conditions up to three times higher than the legacy Huels heater. The upgrade will directly support development of future advanced hypersonic systems by providing improved aerothermal simulation environments for high-speed vehicle materials and structures.

The first phase of the upgrade, the Prototype, involves installation of the segmented arc heater in the H2 test cell, installation of the new diffuser and a facility calibration test series to demonstrate and document the new test conditions for customers.

“The Prototype will replace the older Huels heater with a higher-performance 70-megawatt segmented arc heater,” Smith said. “The new [Mid-Pressure Arc Heater] segmented heater will be based closely on the operational AEDC H3 segmented heater design and will operate in the H2 test cell to provide much higher temperature levels for testing.”

In addition to the heater replacement, AEDC is funding fabrication of a new diffuser that connects the H2 test cell to the exhauster system that provides lower pressure in the test cell. The diffuser work was completed in the AEDC Model Shop, and installation of the new diffuser began in January. Further upgrades to the facility water systems and the power supply are expected as follow-on to further expand the facility test capability to larger test sizes and longer run times during subsequent years.

“The MPAH upgrade will greatly expand the total temperature regime for arc jet testing,” Smith said. “This means that better simulation of flight heating conditions will be available to all the nation’s hypersonic vehicle systems developers than ever before.  This will be a unique test asset for the DOD, and represent a significant new capability. The improved thermal simulation capability of the proposed MPAH facility is not available anywhere else in the world.”

The Prototype heater upgrade is well into design phase, and material procurement and fabrication are ongoing at this time to support the various system interfaces.

Expected completion for facility shakedown of the Prototype is fall of 2016, with initial test capability starting soon after.

The total cost of $21 million for the upgrade effort is shared by AEDC and DOD. The project is being led by the AEDC Test Operations Division with support from the AEDC Space and Missile test and maintenance groups. Test Operations is also providing planning for the expanded Central Test and Evaluation Investment Program upgrade of the water system and electric power supply supporting the full MPAH facility.

“The upgraded facility will be an essential tool supporting materials development and qualification for all next-generation and advanced hypersonic vehicles,” Smith said. “This class of vehicles will be uniquely capable of executing many advanced strike missions. The ability to provide improved test and evaluation simulations for such missions will position our arc heaters as crucial enablers for all future programs having need of advanced thermal protection materials.”