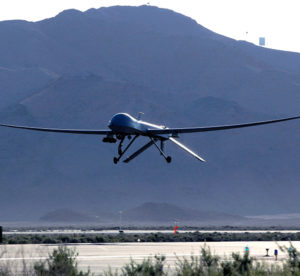 The primary mission of the MQ-1 Predator is interdiction and conducting armed reconnaissance against critical, perishable targets. When the MQ-1 is not actively pursuing its primary mission, it provides reconnaissance, surveillance and target acquisition in support of the Joint Forces commander.

Inadvertent entry into clouds coinciding with momentary loss of satellite link caused the crash of an MQ-1B Predator Sept. 24, 2015, according to an Abbreviated Accident Investigation Board report released March 31.

The aircraft was operating in an undisclosed area at the time of the mishap.

The board president found, by a preponderance of evidence, that  significant contributing factors of the mishap were unforecasted and rapidly deteriorating weather conditions, combined with the flight crew’s breakdown of visual scan and complacency. The aircraft was operated by the 18th Reconnaisance Squadron, Creech Air Force Base, Nevada. Total losses are approximately $5.1 million, and the aircraft was not recovered.

The report notes the aircraft crew failed to recognize subtle changes in the weather prompting the need to conduct a more timely weather scan. When the aircraft flew into cloud cover, it simultaneously lost satellite link. Shortly thereafter, the crew spotted ice buildup using the onboard camera. Before they could recover the aircraft from cloud cover, ice buildup and lost link made the controls erratic, causing the aircraft to stall. A later flight by another aircraft confirmed the crash site. The wreckage was not recovered.