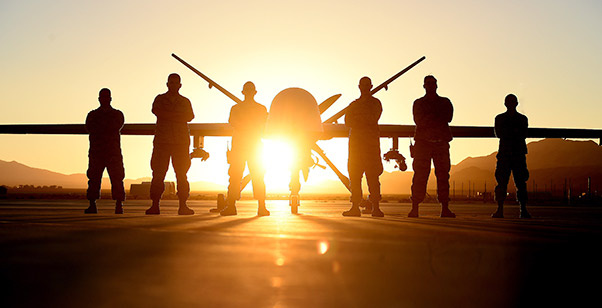 The Air Force recently approved two initiatives for the remotely piloted aircraft career field. Eight RPA reconnaissance squadrons will be redesignated as attack squadrons, and the Air Force has also authorized RPA aircrews to log combat time when flying an aircraft within designated hostile airspace, regardless of the aircrew’s physical location.

The changes were two of many recommendations that emerged as part of Air Combat Command’s Culture and Process Improvement Program, which seeks to address a number of issues affecting operations and the morale and welfare of airmen across the RPA enterprise.

“The Airmen who perform this essential mission do a phenomenal job, but we learned from the RPA pilots, sensor operators and their leaders that these airmen are under significant stress from an unrelenting pace of operations,” said Air Force Secretary Deborah Lee James. “CPIP was established to help stabilize the RPA enterprise. These policy changes are steps toward addressing issues highlighted by RPA operators in the field.”

The redesignation will affect the names, but not the core missions of RPA squadrons at Holloman Air Force Base, N.M.; Whiteman AFB, Mo.; and Creech AFB, Nev. These units, consisting of approximately 600 officers and 700 enlisted airmen, will continue to provide real-time intelligence, surveillance and reconnaissance to commanders, close air support to ground troops, and post-operation battle damage assessment to senior leaders.

Previously, squadrons consisting of MQ-9 Reaper aircraft were designated attack squadrons, while squadrons of MQ-1 Predator aircraft were designated reconnaissance squadrons. The redesignation anticipates the Air Force’s ongoing transition to an all MQ-9 fleet and acknowledges the capability of these units to support military operations that can include strikes against targets. The cost of the redesignation is minimal, mostly affecting signs, stationary and other local items that display the unit’s name or emblem.

“Aerial warfare continues to evolve. Our great RPA airmen are leading that change. They are in the fight every day,” Welsh said. “These policy changes recognize the burdens they bear in providing combat effects for joint war fighters around the world.”

Since their first employment over the Balkans, Air Force RPAs have been in high demand, according to Air Force senior leaders. This has led to rapid expansion of both the number of squadrons and the number of operators.

Unique organizational structures and names evolved during this time, and the Air Force is now taking steps to standardize operations and improve conditions for operators.

The RPA mission “is instrumental to achieving decision advantage against our enemies, is an indispensable asset to our national security, and is the backbone to the success of our fights in Iraq, Syria, Afghanistan, and other areas combating extremism and terrorism,” Gen. Hawk Carlisle, commander of ACC, said March 16 in his testimony to the U.S. Senate Committee on Armed Services. “The Air Force is fully invested in continuing to achieve sustainability of this enterprise.”

The Air Force reduced the number of combat lines to 60, from 65 in 2015. They also increased incentive retention pay for pilots to $25,000, matching incentive pay for rated pilots in other airframes.