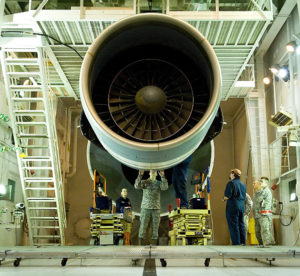 Personnel assigned to the 436th Maintenance Squadron Jet Engine Test Cell perform maintenance on a General Electric TF39 high bypass turbofan engine March 17, 2016, on Dover Air Force Base, Del. This engine, serial number 441052, was the 5,601st and last TF39 to be tested in the test cell.

As the number of legacy C-5 Galaxy aircraft are converted to C-5M Super Galaxies, the need for General Electric TF39 high pressure turbine engines will become a thing of the past by late 2017, as they are replaced by the quieter and more powerful General Electric CF6-80C2 turbofan engine.

The sound produced by a GE TF39 aircraft engine uniquely associates it to a legacy Lockheed C-5 A/B/C Galaxy aircraft, whether it is running on the flight line, producing thrust for flight or in the engine test cell, it is a distinct sound C-5 aircrew and maintainers can easily recognize.

On March 25, 2016, a ceremony attended by more than 200 people, was held to honor the hard work and professionalism of all those, past and present, who worked at the 436th Maintenance Squadron TF39 Jet Engine Intermediate Maintenance Propulsion Flight’s five shops. It also marked the last TF39 produced for service, thus ending 45 years of TF39 production since 1971.

“The TF39 Propulsion Flight composed of the Jet Engine Shop, Test Cell, Accessories, Non-powered Aircraft Ground Equipment, and the Auxiliary Power Unit sections, have been integral components in the success of Dover AFB’s mission,” said Maj. James Wall, 436th Maintenance Squadron commander. “Propulsion Flight has been the catalyst for a 45-year legacy of dependable jet engine assembly in which 5,601 have been produced.” 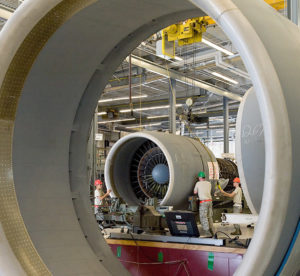 Looking through the nacelle of a General Electric TF39 engine, Airmen assigned to the 436th Maintenance Squadron Jet Engine Intermediate Maintenance flight secure a TF39 engine to an engine trailer July 21, 2014, on Dover Air Force Base, Del. The weight of an operational engine is more than 7,200 pounds and is capable of 41,000 pounds of takeoff thrust for legacy C-5A/B Galaxy aircraft.

Many former Propulsion Flight workers consisting of U.S. Air Force active duty and retirees, Reservists, Air Reserve Technicians, Civil Service employees, contract field team members and their family members, returned here for the celebration ceremony because for some, this is where their jet engine mechanic career started, continued or culminated.

“My career started in Jet Shop, January 1983 and during my time at Dover, I held every position as a jet engine mechanic, both back shop and flight line, all the way to the maintenance group chief position,” said retired Chief Master Sgt. John Scinto, The Boeing Company, C-17 Fleet Support Center Lead, Sustaining Engineering & Fleet Performance. “I firmly believe I couldn’t have been as successful in my Air Force career without the folks in the Propulsion Flight and it was my honor to have served with them.”

From the most seasoned jet engine mechanic to the newest Airman, the most valuable asset has been the hundreds of people who have become part the Propulsion Flight family over the years.

“The best part about jet shop was working with the different people; active duty, Reserves, Air Reserve Technicians and civilians,” said Scinto. “I can’t name everyone because there were so many but they touched my career in such a way that I could never properly thank them all. Not only did they instill the foundation of jet engine maintenance but provided me with a chance to grow, develop and excel.”

Many attendees proudly wore t-shirts and hoodies bearing the propulsion flight logo with the motto “Thrust you can trust,” signifying the end of TF39 production.

“The TF39 engine has a particular sound to it and it didn’t matter whether I was living across the street in base housing, the sound never bothered me because I knew it was doing the Air Force’s mission.” said Matthew Farren, 436th MXS jet engine mechanic.

Farren, as well as others stated they will miss the people the most. 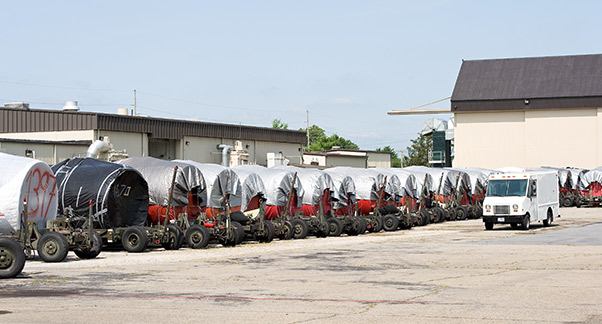 “It was a concerted effort, the 512th Airlift Wing Reserves, Air Reserve Technicians, active duty, contract field team members and Department of Defense civilians were definitely a unique entity in that we all contributed to this mission of producing engines for the A and B models over the years,” said Kevin Morrow, 436th MXS jet engine shop crew supervisor and master of ceremony for the event.

With a TF39 idling in the test cell for attendees to observe, Clifford Jaffray under the supervision of Daniel Weimer, 436th MXS aircraft jet engine technician supervisor, unceremoniously shut down the 5,601st and last engine to be ran in the test cell with one flick of a switch fittingly by the very first person to run a TF39 in the test cell back in 1971.

Speaking of his time and experience at the test cell, Weimer said, “Mr. Jaffray taught me how the wrenches worked and gave me my background.”
As the engine motored down and people filed out of the control room, an eerie silence filled the air, thus etching another piece of Dover AFB history and ending the era of TF39 production.