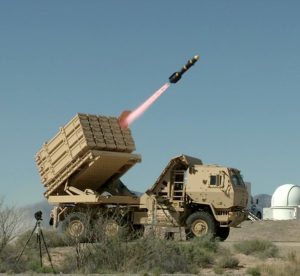 A series of tests here is demonstrating the capabilities of a new air defense system in development by the U.S. Army.

The Integrated Fire Protection Capability Increment 2-Intercept, IFPC Inc 2-I, is a defense system in development to protect Soldiers from aircraft, cruise missiles, and unmanned aerial systems, as well as artillery weapons like cannons, rockets and mortars.

“If you go back and take a look at what has happened in terms of the threat over the last couple years you’ll find that UAS systems and cruise missiles have really become a problem,” said Col. Terrence Howard, program manager for Cruise Missile Defense Systems. “So we’ve got to introduce materiel solutions that can address multiple threats.”

As an emerging Army air defense system, not only does it have the requirement to defend against a wide variety of threats, but it also must integrate into the Army Integrated Air and Missile Defense system. AIAMD is a networked air defense control system also currently going through testing on WSMR.

“The idea behind that is ‘plug and fight,’ take multiple systems, multiple radars, and put it on a network and solve whatever threat situation we have out there,” Howard said.

This March and April, IFPC Inc 2-I is conducting several launches to test the systems ability to launch various missile types, and demonstrate its ability to connect to the AIAMD system and utilize its Integrated Battle Command System, IBCS, a computer system that allows a small number of Soldiers to better manage and control a complex air defense network composed of different radars and missile systems.

“(It’s about) integration of a lot of existing capability,” said Tamera Adams, chief engineer with the Army’s Cruise Missile Defense Systems projects. “It’s kind of like if you’re trying to put together a new stereo system in your house. You’re buying speakers from this vendor, a turntable from another and a DVD player from another. You’re trying to put them together to get the best capability for your house.”

One of the most visible features of the IFPC Inc 2-I system is its Multi-Mission Launcher, MML. The launcher, mounted on a medium tactical truck similar in size to a delivery truck, carries 15 modular missile launch tubes on a turret system allowing the missiles to be launched in almost any direction. The vehicle’s size allows it to be placed in nearly any location, and the tube system will allow the launcher to customize its missile loadout, to meet the requirements of many different missions.

To date the program has launched a Hellfire Longbow and a pair of AIM-9X Sidewinders utilizing the IBCS and sensor data from a Sentinel radar unit, as well as conducting a ballistic test of the Miniature Hit-to-Kill missile, a compact missile intended for use against rocket, artillery and mortar threats. In most of these tests the IFPC Inc 2-I system is being used against targets representing cruise missile or UAS threats to allow the IFPC Inc 2-I test to evaluate not just the systems compatibility with the IBCS and missiles, but also evaluate how it performs against those threats.

“We’re firing the entire kill chain and seeing what the end product looks like as we shoot at unmanned aerial systems and cruise missiles,” Howard said.

IFPC Inc 2-I is a joint collaborative effort between the Army’s Program Executive Office for Missiles and Space’s Cruise Missile Defense Systems Project Office and the Army Aviation and Missile Research, Development, and Engineering Center. Produced largely in house by the Army, the program has seen rapid progress, going from concept, to demonstrator, to its current full featured prototype form in only a few years.

“We’ve been working for the past 24 months, on maturing the design of our new launcher and integrating with three major existing programs: AIAMD, the sentinel radar system and the AIM-9X missile,” Adams said.

As the Army’s premiere location for the test of complex missile and air defense systems, as well as the existing presences of the AIAMD program, WSMR was the logical choice for this test series. WSMR has supported the IFPC demonstrator in previous testing, and is able to provide not only the space, but also the targets, telemetry, staff and infrastructure needed for testing counter cruise missile and UAS systems.

“(WSMR has) the technical expertise to run these ranges and really provide the data we need to get out of the test and the test results,” Howard said. “So we can go back and do our analysis and say ‘did we get this right?'”

More firings are scheduled at WSMR to continue testing the launchers capabilities and compatibility with other missiles and systems.