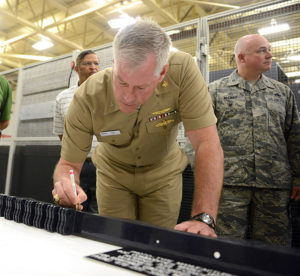 They learned how the ALC manufactures the Navy’s much-needed F/A-18 outer wing spars through a partnership agreement with NORDAM, who supports the aircraft’s wing repair lines.

The successful production of the first order of 10 forward spars for the aircraft’s outer wing panels, completed in March, means the Navy’s fleet of legacy Hornets can continue to fly sorties downrange after what has been a particularly mission-heavy season.

In high demand of these key internal structural components are the forward and aft spars, according to NORDAM, an approved commercial repair source for legacy Hornet outer wing panels.

Because the all-weather attack aircraft, flown by the Navy and Marine Corps is currently being flown beyond its originally forecast life due to mission requirements, it was experiencing significant corrosion and fatigue issues in its outer and inner wing panels.

NORDAM approached the ALC to assist with manufacture requirements of the wing spars, and a public-private partnership agreement was signed in 2014. The implementation agreement was signed June 2015, and the first order of outer wing spars arrived at Robins Air Force Base August 2015. Additional orders are being worked.

“The ability to team and work through engineering approvals across the services, and then to bring industry to help further reduce turnaround times and reduce cost, is very impressive,” said Navy Capt. Matt Ott, NAVSUP WSS Aviation Operations director. “I think it shows the engineering expertise and the ability to work together to solve a critical Navy fleet problem.”

“We’ve got to keep our F/A-18s flying, which are in high demand overseas,” Ott added. “This specific part allows us to save and salvage a wing panel which would have previously been scrapped. So instead of a long lead time to fabricate something new and very costly, this returns an aircraft to service so we can execute missions at home and abroad. It’s great to be partnering with Warner Robins (Air Logistics Complex), along with our Fleet Readiness Centers. We’ve got the best in class with industry and the best in class in the workforce here with the Georgia team.” 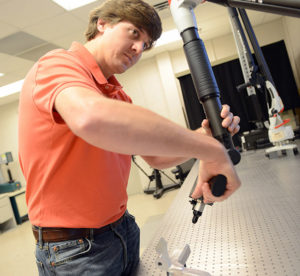 This ongoing partnership between the Air Force and Navy is also a particular source of excitement for NORDAM, one of the world’s largest independently owned aerospace companies.

“CMXG has been able to produce these for us, which allows us in turn to take wing components, their inner and outer wings on an F/A-18 that otherwise would sit idle, and make them serviceable,” said Basil Barimo, NORDAM’s Repair Divisions executive vice president.

“It’s been a huge step forward for us and the Navy in being able to salvage a lot of parts that would otherwise be sitting around,” Barimo said. “We’ve got many more critical safety parts that are in the pipeline for Robins to produce. It’s exciting.”

“Warner Robins (ALC) will be making these for as long as we support the aircraft, as this is a very complex part. They’ve done a wonderful job here,” said Ed Koenig, NORDAM’s Warfighter Support director.

“This is really what we are driving toward, where we have all the different services working together,” Johnson said. “Today we have the Air Force, the Navy and all of our industry partners coming together to attack a common problem. That’s the power for the future of our Department of Defense as we collaborate more with our sister services and industry partners.”