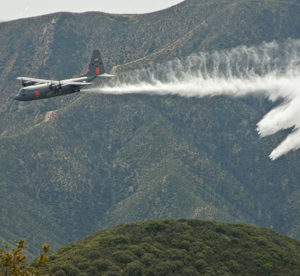 A line of water is dropped high above the Los Angeles Forest from a Air National Guard C-130 containing the MAFFS (Modular Airborne Firefighting System) system used to combat wild fires during annual MAFFS training on May 3 2016.

Last month, Bravo’s Air National Guard unit was named one of four MAFFS units, and he will soon execute the same missions that saved his farmland last August from the Fort Complex Fire west of Redding, Calif.

Since 1974, MAFFS — a fire retardant delivery system inserted into C-130 aircraft — has been a joint effort between the U.S. Forest Service and the Department of Defense.

“That experience provided extra motivation to execute and do a good job when we do get the mission,” said Bravo, who is one of 13 Airmen of the 152nd here this week for annual MAFFS certification.

The 152nd is set to replace the 145th Airlift Wing, of Charlotte, N.C., in the four-unit wildland firefighting mission, the National Guard Bureau announced last month.

“We are here to learn the very specialized work of being a MAFFS unit,” said Col. Karl Stark, 152nd Airlift Wing commander. “The way we see it, in the C-130 realm, all of us are pretty good athletes. But in the MAFFS community, this is the elite force that comes out and does a very, very specific mission — a very noble mission.”

In the next three to five years, the 145th will be phased out of MAFFS as that unit converts to C-17 aircraft and the 152nd completes certification and training for the mission.
Last year, MAFFS crew completed 372 drops with more than 843,000 gallons of fire retardant on 15 fires, each in California. MAFFS equipment can discharge up to 3,000 gallons — 28,000 pounds — of retardant in less than five seconds, covering an area one-quarter of a mile long and 60 feet wide. Once discharged, it can be refilled and airborne in less than 20 minutes.

“It is far and away one of our most satisfying missions,” said Col. Scott Sanders, of the Wyoming National Guard’s 153rd Airlift Wing and commander of the MAFFS Air Expeditionary Group, which oversees MAFFS units.

Along with the 152nd and the 153rd, other MAFFS units include the 146th Airlift Wing (California Air National Guard) and the 302nd Airlift Wing (Air Force Reserves).

“The skill and experience in training they have…lends itself very well to these type of firefighting operations,” said Kim Christensen, deputy assistant director of operations for Fire Aviation Management at the National Interagency Fire Center. “We rely very heavily on the surge capabilities that the military provides.”

“It’s been very interesting to see the perspective from units that have been doing it for more than 20 years,” Bravo said. “I’m certainly glad they were out there last year working near my farm. For that reason, and many other reasons, I look forward to working this mission in the future.”

More than 400 Air National Guard and Air Force Reserve Airmen from across the country gathered May 2-6, 2016, to be certified on the military’s Modular Airborne Fire Fighting System, known as MAFFS, in preparation for the 2016 wildland fire season at Channel Islands Air National Guard Station in Port Hueneme, California.

The Air Force’s MAFFS aerial firefighting fleet is supported by the Air Force Reserve’s 302nd AW, based in Colorado Springs, Colo.., and the ANG’s 153rd AW, located in Cheyenne, Wyo..; the 146th AW, based at Channel Islands, Calif..; and the 145th AW in Charlotte, N.C. Recently, the National Guard Bureau selected the 152nd Airlift Wing with the Nevada ANG in Reno to replace the 145th AW as the North Carolina-based unit begins its transition to the C-17 Globemaster III.