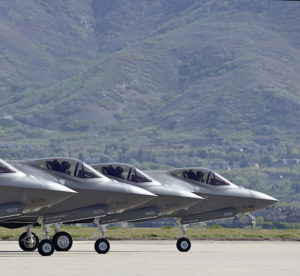 Four F-35 Lightning IIs prepare for takeoff at Hill Air Force Base, Utah, May 4, 2016. Hill’s active-duty and Reserve F-35 pilots recently began flying routine four-ship configurations, just as they would in combat. This marked a key milestone in getting the Air Force’s newest fighter jet to reach initial operational capability later this year, at which time it will be combat ready.

Active-duty and Reserve pilots from the 388th and 419th Fighter Wings used the jet’s intricate computer network to evade a series of simulated threats. They worked together to detect and jam enemy radar and identify and destroy targets from roughly 40,000 feet, just as they would in combat.

The F-35 was created to do just that. It’s impossible to penetrate this type of enemy territory with non-stealth aircraft such as the F-16 Fighting Falcon, A-10 Thunderbolt II and F-15 Eagle, Watkins said.

In addition to being stealthy, the F-35 is designed to gather, fuse and distribute more information than any fighter jet in history.

“The F-35 gives us the ability to access enemy airspace like never before,” said Lt. Col. Curtis Pitts, the commander of Detachment 1, 419th Operations Group. “The F-35 is a giant leap in technology and offers a significant air superiority advantage in high-threat areas.”

The 34th FS flew their first four-ship flights during two days of surge operations in March to test the ability of F-35 maintenance troops to get aircraft off the ramp and into the skies quickly. They generated 16 sorties with zero maintenance discrepancies, according to Capt. Richard Palz, the 34th Aircraft Maintenance Unit officer in charge.

“We’ve vetted and tested our ability to generate four-ships and doing so regularly will become routine, which is a significant step on the road to initial operational capability,” Palz said.

The Air Force’s first operational F-35 arrived at Hill AFB in September 2015. Hill’s fighter wings are currently working to reach IOC, at which time the F-35 will be ready for combat.

The base will be home to three operational F-35 fighter squadrons with a total of 78 aircraft by the end of 2019. The 388th and 419th FWs fly and maintain the Air Force’s newest fighter aircraft in a total force partnership, which capitalizes on the strength of both components.