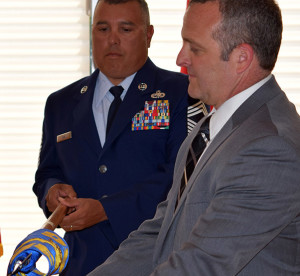 “The growth of the PSC will relieve that pressure, as well as ensure our coalition partners are ready to participate in any future operations,” Kraus said.

The partner countries include: Australia, Canada, Denmark, Italy, Norway, the Netherlands, the United Kingdom and Turkey. These countries provided critical design input and funding during the early stages of the F-35 program, which differs from foreign military sales customers.

“The PSC will directly support the partners, who currently have no indigenous capability to create mission data for the F-35,” Kraus said.
The complex will interact with mission data programmers and data analysts from the partner nations. According to Kraus, one of the key projects for the unit is to support the partners in the creation of two separate hardware in the loop testing facilities — only one currently exists.

The F-35 PSC started as a small team within the 513th Electronic Warfare Squadron at Eglin AFB, which provides F-35 mission data files to the Air Force, Navy and Marine Corps. The team staffs 24 civilian employees and contractors, with plans to grow to about 100 personnel. The new unit will report to the 53rd EWG.

While the mission of the complex has been ongoing for nearly five years, Kraus sees the formalization of the unit as a step forward.

“The formal activation of the unit will give me a greater ability to support the partners in their efforts,” he said. “(I can now) elevate the partner support functions to an equal level with U.S. squadrons, as opposed to a subordinate role.”