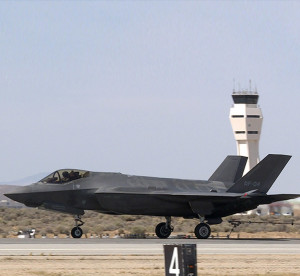 When most people hear “tailhook” they think of U.S. Navy planes and aircraft carriers. However, almost all U.S. combat aircraft have a tailhook.
That also goes for the Air Force’s new F-35A Joint Strike Fighter.

The JSF Integrated Test Force at Edwards Air Force Base, Calif., conducted the first set of tests for the F-35As tailhook. F-35s have landed using a tailhook before, but not at the speeds and weights being tested now.

By nature, Navy aircraft need tailhooks to catch arresting wires on aircraft carriers. The Navy’s version of the JSF –the F-35C — has a significantly more robust tailhook that is designed differently for Navy purposes.

On Air Force planes tailhooks are only used to help the jet stop when landing distance is insufficient or if the jet has a brake malfunction or directional control issue. They are designed as a one-time use device whereas Navy tailhooks like on the F-35C can deploy, retract and stow.

“In the big picture, the F-35A tailhook is designed to stop the jet in an emergency primarily,” said Maj. Corey Florendo, 461st Flight Test Squadron project test pilot. “We have to make sure the system works as designed and as specified. We’re out there to verify the performance of the system, up to and including the worst case conditions we can possibly envision.”

The initial testing included powering the F-35A at 180 knots over the ground; about 200 miles an hour. 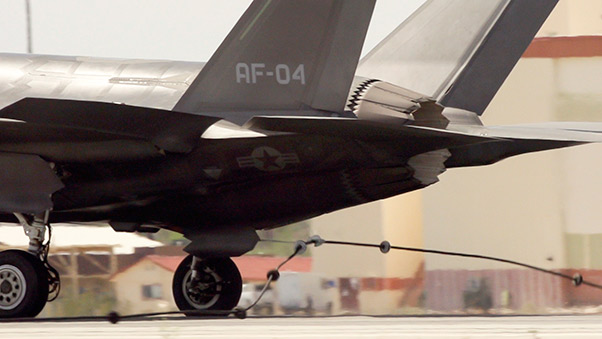 As high speed cameras record, AF-04 from the 461st FLTS speeds down the runway. Engineers plan the time to deploy the tailhook, and when the time comes, the test pilot deploys the hook to catch an arresting cable in place to safely stop the fighter. Data is collected and the video footage is reviewed.

“There’s a lot of parameters that we’re looking at. Obviously, we’re curious about the forces on the hook. Aside from just the numbers, we’re also curious if the tailhook system is going to be safe. ‘Is the cable going to do something like hook the main landing gear and not the cable?’ No one has done this before, and before this happens to someone out in the Air Force, we want to see it and make sure it works,” Florendo said.

AF-04 had several successful engagements with the tailhook and arresting cable, which will clear the path for additional tests coming up. Florendo said they will be looking at different “offsets” in future tests.

“Ideally you want to be in the center of the runway, but we want to also test to see what happens when the pilot is not in the center,” he said.
Like most other test projects on Edwards, JSF tailhook testing requires heavy coordination throughout different organizations on base and off. 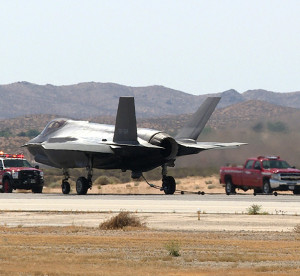 A video frame grab shows an F-35A from the 461st Flight Test Squadron come to a stop after catching an arresting cable with its emergency tailhook during a test April 20, 2016. Tailhooks on U.S. Air Force planes are mainly used in emergency situations when landing.

“Obviously, we’re not the only program that executes here at Edwards,” said Andrew Soundy, Lockheed Martin experimental test pilot. “We have the main runway that has the permanent cables attached, so if we’re doing cable testing or landing gear testing, we really need sole use of the runway. If we used the permanent cables, we would severely impact the outer runway.”

That’s where the Air Force’s 820th RED HORSE Airmen from Nellis Air Force Base, Nevada, come in. RED HORSE stands for rapid engineer deployable heavy operational repair squadron engineers. The team set up the mobile aircraft arresting system on Edwards’ 12,000-foot inside runway so impact on other flight operations is minimal during testing.

“I’ve been involved in a lot of test projects over the year, this one has probably the most input from multiple different agencies and it’s great to see the way it’s all come together,” said Soundy.

“The big thing to me is the team effort that’s been going on here at Edwards. This is a great place to be doing testing with the weather that we get here and the experience we have here; all those teams coming together to make this happen has been great.”

Testing will continue this summer.