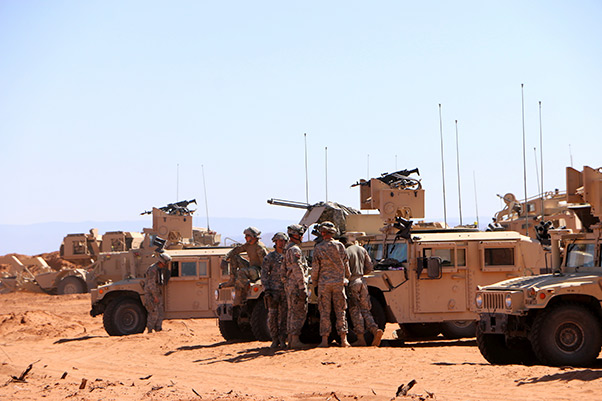 During Network Integration Evaluation 16.2, these soldiers were out in the Fort Bliss, Texas, desert for the duration of the exercise. Within the 2nd Brigade Combat Team, 1st Armored Division’s Main Tactical Operations Center, these soldiers evaluated the systems and provided feedback.

More than 5,000 people from across the country contributed to the soldier-led Network Integration Evaluation that came to completion, May 14.

The testing or evaluation of a total of 16 systems occurred during NIE 16.2. These systems contribute to the Army’s continuing priority of equipping Soldiers to fight, by enhancing expeditionary network and mission command capabilities.

System competencies that soldiers assessed included simplification of the network and beyond-line-of-sight communications, as well as a command initiated anti-personnel system.

As a result of NIE 16.2, industry partners and programs of record will utilize critical feedback gained from Soldiers, allowing them to make improvements to their systems and informed programmatic decisions. Some systems may go through multiple NIEs to decrease vulnerabilities and align with soldiers’ needs. 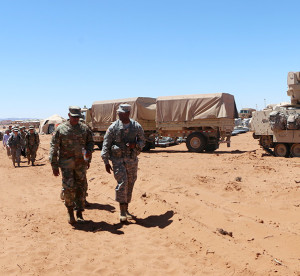 “Trying to mitigate known or any potential vulnerabilities is one of the objectives to be gained from this exercise,” said Col. Terrece Harris, director, Capability Package Directorate. “We put the systems out with some of the known issues, apply patches developed by the engineers and programmers and see if they respond or work as intend.”

Before the start of any NIE, Capability Package Directorate, or CPD, a part of the Army’s System of Systems Engineering and Integration Directorate, designs the vehicles, integrates the systems, and ensures all the equipment is ready for the evaluations.

Once the network is validated and the exercises begin, CPD transitions to a support role, allowing Soldiers to operate the equipment on their own, but at the same time providing field support as needed, as well as supportability and sustainment feedback to the respective Program Executive Offices and Program Managers.

For example, having multiple new communications capabilities on a single platform leads to challenges that engineers must work to mitigate. Systems are typically designed individually, with designers not necessarily considering the integration aspect of how their system would operate within a system of systems environment. NIEs bring multiple systems together on one platform; when size, weight and power become integration factors. 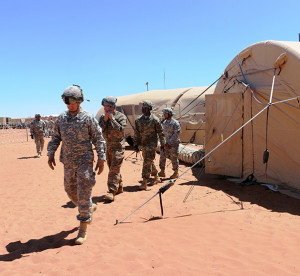 Soldiers exit the 2nd Brigade Combat Team, 1st Armored Division’s Main Tactical Operations Center, during the Network Integration Evaluation 16.2 at Fort Bliss, Texas. Their feedback on systems is one of the cornerstones of Army modernization.

“From an integration perspective, every NIE and AWA (Army Warfighting Assessment) presents unique challenges for us,” Harris said. “A cornerstone of what we do is look for innovative and efficient ways to put capabilities on common and newly developed platforms.”

Due to the NIE’s unique system of systems integration approach, the Army’s tactical radios, energy solutions, and many other technologies have been able to advance in ways that are beneficial to Soldiers and the network.

AWA 17 will be the next modernization event, occurring this fall. Concepts and capabilities will make their way back to the Fort Bliss, Texas desert. International partners and sister services will also participate, ensuring their capabilities, as well as personnel, are as integrated and interoperable as can be.