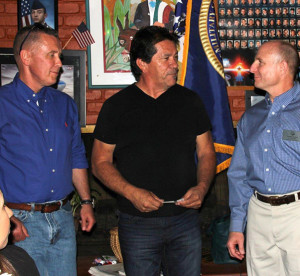 Civ-Mil held its Spring Mixer at Domingo’s Mexican Restaurant with 90 people in attendance, filling every seat in the house and then some.

The purpose of the organization is to establish a friendly benevolent association of civic leaders and military personnel at Edwards Air Force Base.

John Fergione, Civ-Mil president, thanked the members for attending and bringing their guests, and acknowledged the committee members for organizing such an excellent evening.

Later, he presented Domingo Gutierrez, owner of Domingo’s Seafood and Mexican Restaurant, and a long-time member of Civ-Mil with a Letter of Appreciation from the Edwards AFB Civ-Mil Support Group for making his restaurant available to Civ-Mil for this annual function.

“I’m always honored to help out and support our people on base,” said Gutierrez, who shut down the restaurant for the mixer.

In his remarks made to the Civ-Mil members and guests, Brig. Gen. Carl Schaefer, 412th Test Wing commander, said the Edwards AFB Civ-Mil Support Group was easily the best group of its kind in the Air Force.

“A big part of why our airmen can do what they do so well, is because of the support we get from the people here tonight,” said Schaefer. 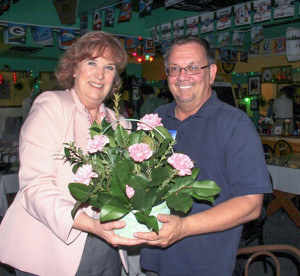 “We left the front row open for our military and other special guests,” said Rangel. “It’s just a small way to show our appreciation for all that you do.”

The band has a new album coming out this fall. “Ambrosia is one of the best live bands I have ever seen and I have seen hundreds of them,” Rangel said. “Their show is always top notch and I always find myself singing along with the audience to all their hits, and they have a lot of them.”

“I don’t want to date myself but yes, I listened to Ambrosia and danced to their music at my prom!” said Kathy Fergione who helped organize the mixer and plans on attending the May 28 concert at the Lancaster Performing Art Center.