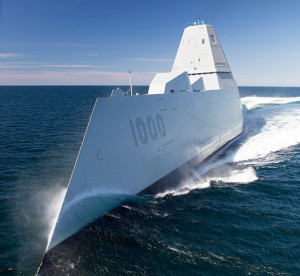 The future guided-missile destroyer USS Zumwalt (DDG 1000) transits the Atlantic Ocean to conduct acceptance trials with the Navy’s Board of Inspection and Survey (INSURV). Acceptance Trials are the last significant shipbuilding milestone before delivery of the ship to the U.S. Navy, which is planned for next month. While underway, many of the ship’s key systems and technologies including navigation, propulsion readiness, auxiliary systems, habitability, fire protection and damage control capabilities will be demonstrated to ensure they meet the Navy’s requirements.

The Navy announced May 20 the future next-generation guided-missile destroyer USS Zumwalt (DDG 1000) is scheduled to be homeported at Naval Base San Diego following its commissioning in fall 2016. Zumwalt is scheduled to arrive in San Diego in late 2016.

Construction of Zumwalt commenced February 2009 and the ship was launched Oct. 29, 2013. Currently, the ship is conducting hull, mechanical, and electrical tests and trials with a subsequent period to follow for combat and mission system equipment installation, activation, and testing.
The ship is commanded by Capt. James A. Kirk.

The multimission DDG 1000 is tailored for sustained operations in the littorals and land attack, and will provide independent forward presence and deterrence, support special operations forces, and operate as an integral part of joint and combined expeditionary forces. Its multimission design and littoral capabilities make it a 100 percent globally deployable asset to the fleet.

The U.S. Navy continually monitors force readiness and ability to provide the most robust, capable maritime force possible. Stationing destroyers in a West Coast port supports rebalance to the Indo-Asia-Pacific region, placing our most advanced capabilities and greater capacity in that vital theater. By 2020, approximately 60 percent of Navy ships and aircraft will be based in the region.