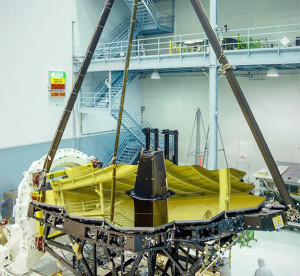 Northrop Grumman delivered the OTE in March to NASA’s Goddard Space Flight Center in Greenbelt, Md. Northrop Grumman is under contract to Goddard and leads the industry team that designs and develops the Webb Telescope, its sunshield and spacecraft. Northrop Grumman has completed the integration, testing and delivery of the telescope.

The Webb telescope’s 18 hexagonal gold coated beryllium mirrors are supported by the telescope structure. The OTE hardware is made of the most precise graphite composite material system ever created, and contributes to the Webb Telescope’s ability to provide an unprecedented exploratory view into the formation of the first stars and galaxies formed over 13.5 billion years ago.

The precision manufacturing and integration of the 21.5 foot telescope structure allow it to withstand the pressure and weight of the launch loads when stowed inside the 15-foot-diameter fairing of the Ariane 5 rocket. The cutting-edge design and transformer like capabilities of the telescope structure allow it to fold-up and fit inside the launch vehicle, and then deploy once the Webb telescope reaches its ultimate destination, one million miles away from earth. Furthermore, throughout travel and deployment, the telescope simultaneously maintains its dimensional stability while also operating at cryogenic or extremely cold temperatures, approximately 400 degrees below zero Fahrenheit. The telescope is the world’s first deployable structure of this size and dimensional stability ever designed and built.

“The significant milestone of completing and delivering the OTE to NASA’s Goddard Space Flight Center, marks the completion of the telescope, and attests to the commitment of our hardworking team,” said Scott Texter, telescope manager, Northrop Grumman Aerospace Systems. “The telescope structure is one of the four main elements of this revolutionary observatory. The other elements include: the spacecraft, sunshield and the Integrated Science Instrument Module (ISIM), the latter of which is also complete. All of the elements require a collaborative team effort. We are all committed to the cause and excited about the upcoming phases of development as we prepare for launch in October 2018.”

The next step in the progress of the telescope structure includes its integration with the ISIM to combine the OTE and ISIM, referred to as the OTIS. The OTIS will undergo vibration and acoustic testing by the end of this year, and then travel to NASA’s Johnson Space Center in Houston, to undergo optical testing at vacuum and operational cryogenic temperatures, around 40 kelvin. The OTIS will be delivered to Northrop Grumman’s Space Park facility in Redondo Beach, towards the end of 2017, where it will be integrated with the sunshield and spacecraft.

The James Webb Space Telescope is the world’s next-generation space observatory and successor to the Hubble Space Telescope. The most powerful space telescope ever built, the Webb Telescope will observe the most distant objects in the universe, provide images of the first galaxies formed and see unexplored planets around distant stars. The Webb Telescope is a joint project of NASA, the European Space Agency and the Canadian Space Agency.