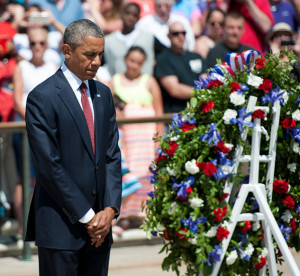 President Barack Obama bows his head after laying a wreath at the Tomb of the Unknown Soldier at Arlington National Cemetery in Arlington, Va., on Memorial Day, May 25, 2015.

In issuing his Memorial Day proclamation yesterday, President Barack Obama urged all Americans to observe a National Moment of Remembrance at 3 p.m. local time on the May 30 holiday.

Here is the text of the president’s proclamation:
With courage and a love of country that knows no limits, America’s men and women in uniform exemplify patriotism at its core — stepping into harm’s way to protect our people and to safeguard the ideals that have long sustained our democracy.  Those who serve under the stars and stripes embody the highest form of citizenship, and on Memorial Day, we pay solemn tribute to those brave Americans who laid down their lives to defend our freedom.

Since America’s earliest days, proud patriots have forged a safer, more secure Nation, and though battlefields have changed and technology has evolved, the selflessness of our service members has remained steadfast.  They have stepped forward when our country was locked in revolution and civil war; fought threats of fascism and terrorism; and led the way in securing peace and stability around the globe.  They have sacrificed more than most of us could ever imagine — not for glory or gratitude, but for causes greater than themselves.  In the children who replicate their courage and strength, in the spouses and partners who forever seek to mend their broken hearts, and in the parents who mourn the absence of the sons and daughters they raised, we are reminded of our enduring commitment to do right by our fallen warriors and their families.

Those who gave their last full measure of devotion for the values that bind us as one people deserve our utmost respect and gratitude.  In recognizing those who made the ultimate sacrifice, we pledge to never stop working to fulfill our obligations to all members of our Armed Forces so they know we stand beside them every step of the way — not just when we need them, but also when they need us.

Today, and every day, let us remember the servicemen and women we have lost, and let us honor them by rededicating ourselves to strengthening our Nation’s promise.  With love, grace, and reflection, let us honor our fallen fellow Americans, known and unknown, who sacrificed their freedom to ensure our own.

In honor of all of our fallen service members, the Congress, by a joint resolution approved May 11, 1950, as amended (36 U.S.C. 116), has requested the President issue a proclamation calling on the people of the United States to observe each Memorial Day as a day of prayer for permanent peace and designating a period on that day when the people of the United States might unite in prayer.  The Congress, by Public Law 106-579, has also designated 3:00 p.m. local time on that day as a time for all Americans to observe, in their own way, the National Moment of Remembrance.

NOW, THEREFORE, I, BARACK OBAMA, President of the United States of America, do hereby proclaim Memorial Day, May 30, 2016, as a day of prayer for permanent peace, and I designate the hour beginning in each locality at 11:00 a.m. of that day as a time during which people may unite in prayer.

I also ask all Americans to observe the National Moment of Remembrance beginning at 3:00 p.m. local time on Memorial Day. I request the Governors of the United States and its Territories, and the appropriate officials of all units of government, to direct that the flag be flown at half-staff until noon on this Memorial Day on all buildings, grounds, and naval vessels throughout the United States and in all areas under its jurisdiction and control.  I also request the people of the United States to display the flag at half-staff from their homes for the customary forenoon period.

IN WITNESS WHEREOF, I have hereunto set my hand this twenty-sixth day of May, in the year of our Lord two thousand sixteen, and of the Independence of the United States of America the two hundred and fortieth.