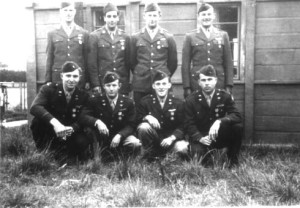 “The first thing we did when we landed and parked the airplane was get out and count how many holes we had in it, either from fighters or from flak,” exclaimed Lewis Herron, a former staff sergeant and 100th Bombardment Group veteran. “One day we counted 103 holes in our airplane!”

Stationed with the 350th Bomb Squadron at Thorpe Abbots, near Diss, England, Herron was a tail gunner on the B-17 Flying Fortress bomber and flew 33 missions on his aircraft, “Heaven Sent,” tail number 338414.

Danger zone
“The 100th Bomb Group performed a mission to Warsaw, Poland,” he recalled. “We went in over Warsaw at 10,000 feet, dropping supplies to the Polish underground, but then we didn’t have enough gasoline to get back to England, so we flew on into Russia, landed there and spent the night.”

In a Skype interview April 20, 2016, the veteran described how the next morning he and the rest of his crew loaded up their aircraft with bombs, and deployed their ordnance on a railroad bridge in Budapest, Hungary, on their journey home.

“We got credit for two missions after that trip,” said Herron.

Each aircraft was accompanied by a nine-person crew made up of a bombardier, navigator, pilot, co-pilot, flight engineer, radio operator, ball turret gunner, waist gunner and tail gunner. The same crew stayed together on all missions. 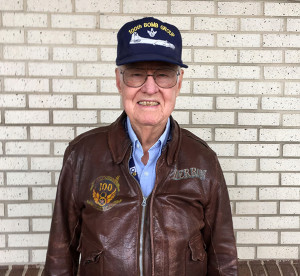 Lewis Herron, 100th Bombardment Group veteran and former staff sergeant with the 350th Bomb Squadron at Thorpe Abbots, England, during World War II, poses for a photograph April 20, 2016, in North Carolina. Herron was a tail gunner on “Heaven Sent,” a B-17 Flying Fortress. The heritage of the 100th Air Refueling Wing began with the 100th BG and the Bloody Hundredth.

“When we got together and our crew was formed, the only ones who didn’t know exactly what they were going to be doing were the gunners. One of the other guys was real short, so I said he’d be a good one for the ball turret gunner, who sits underneath the airplane,” recounted Herron. “The other two looked at me, and I said, ‘Well, if nobody wants it, I’ll take the tail; I’d like to have that.’ So it was my choice.”

Herron had an idea when he first joined the U.S. Army Air Corps about being a tail gunner.

“We were in training in the States, and every chance I’d get I’d crawl back to the tail of the airplane and ride back there,” he chuckled. “I was kind of fascinated with being back there – it was a good place to be, but of course it was one of the most dangerous places on the aircraft!”

Boxed in
Being positioned so far back in the rear of the B-17 meant the tail gunner was constantly squashed up in an extremely small space.

“The only way I could be in there was on my knees; I would kneel down and I had a seat that was tilted at an angle that I could rest my hips on,” he said, describing how he couldn’t sit, stand or anything else. “I had to be in the kneeling position to fly back there, it was that cramped! From the edge of my shoulders to the edge of the aircraft was about 6 to 8 inches; I was pretty much boxed in.”

The 100th BG veteran then held up a photo taken in 2015 at a reunion for 100th BG members, which took place in Louisiana. The photo showed two Square D tails, one with the original tail markings on a B-17, and the second displayed on one of the 100th Air Refueling Wing’s KC-135 Stratotankers.
“Right there in the back is where I was at; you can see the twin-50s (M2HB .50 caliber machine gun) that I fired,” he said proudly.

The tail gunner said most of the missions lasted eight or nine hours.

“The one we made to Russia was 11 hours, 20 minutes – that was the longest flight that we had,” Herron exclaimed. “But I wasn’t back in the tail the entire time; that was the flying time.” 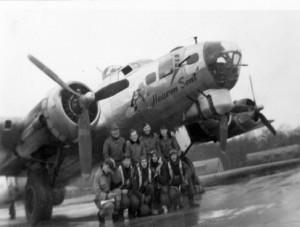 The crew of B-17 Flying Fortress “Heaven Sent” gather for a photograph with their aircraft immediately after landing from a mission over Germany during World War II. Back in 1944, Sept. 11 also brought tragedy when the 100th Bomb Group, from Thorpe Abbots, England, sent up its usual 36 aircraft. Thirteen of those were from the 350th BS; all 13 got shot down.

Being cramped up in such a small space for so many hours could get pretty uncomfortable. The veteran said he had to stand up and walk around for a while afterwards.

Service before Self
The 100th BG suffered heavy losses, earning them their nickname of “The Bloody Hundredth.”

Despite this, the men willingly continued to carry out the missions, knowing each time that this might be their last.

“That was always the thought – will we make it back or not?” Herron recalled. “We had some that were fairly easy and others that were extremely rough, but we always made it back every time. The hardest trip we ever had to make was to a synthetic oil refinery in Merseburg, Germany.

His very first combat mission was Aug. 26, 1944, to Ruhland, Germany. One memory from his early missions was of how cold it was.

“It was never less than 60-below-zero up there and our aircraft weren’t insulated or heated, so not only were you on oxygen for six or seven hours, you had all that dreaded cold which was pretty hard to take,” he said of the memory. “We had electrically heated suits, like an electric blanket people have on their bed. That kept us fairly warm, but of course back in the tail of the aircraft where I was at were all the nooks and crannies of the aircraft – it was like a wind tunnel back there!” he laughed.

Sept. 11: A black day in history
Today, the date 9/11 brings to mind horrifying memories of terrorist attacks. Back in 1944, Sept. 11 also brought tragedy when the 100th BG sent up its usual 36 aircraft. Thirteen of those were from Herron’s squadron, the 350th BS. 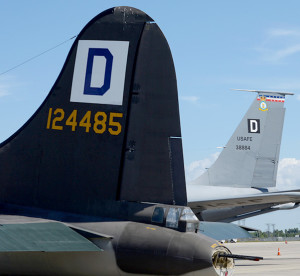 A B-17 Flying Fortress sits alongside a KC-135 Stratotanker assigned to RAF Mildenhall Sept. 24, 2015, at Louis Armstrong New Orleans International Airport in New Orleans, La. The B-17 is a four-engine heavy bomber aircraft developed in the 1930s for the U.S. Army Air Corps.

“There were five (sets of) crew living in each of the barracks. The other four from our barracks flew that day, but we didn’t because we’d flown three days before and were supposed to fly three days after that. So they gave us a day of rest. We had 20 empty beds in our barracks that night,” said Herron sadly. “There had been 25 of us that had lived together for several months, and then all of a sudden 20 of them were gone.”

The price of freedom
Tragedy continued when the tail gunner and the rest of his crew flew a mission to Merseburg Nov. 2, 1944. That was the worst mission for him.

“The 3rd Division went to Europe that day; we lost more than 40 aircraft over that one path. We didn’t get the job completely finished so we had to go back Nov. 27 and the anti-aircraft shot down 56 B-17s,” he said sadly.

The former tail gunner explained that a bomb group formation was made up of 36 aircraft going up each day they flew a mission.

Herron said as they flew each mission, he and the rest of his aircrew tried to concentrate on just getting the job done and getting back home again, though it was always in the back of their minds that they might not make it out alive.

RAF Mildenhall’s KC-135s, which proudly bear the Square D heritage on their tail, don’t carry parachutes. Back in the days of the B-17, parachutes were carried on board.

“They were a chest-type chute; you had the harness on but the parachute itself was down by the side of you,” Herron explained. “I would reach over and grab mine, then snap it on before I got ready to bail out.

Coffee to go
“We also had canteen cups we used for drinking our coffee in the mess hall, and sometimes I would take mine out to the airplane with me right before I was ready to go out on a mission, and would put it down by my side where I sat. One day, this piece of shrapnel came up from the bottom of the airplane and made a big hole in the canteen cup,” he said. “It rattled around and scared me to death!” 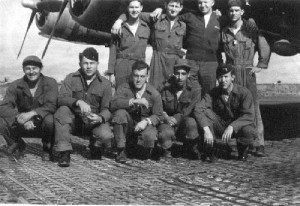 On returning to base, the tail gunner went straight to the supply sergeant to ask for a replacement.

“He asked me why, so I held it up and said, ‘It won’t hold coffee any more!’” he laughed. “The sergeant told me that before I could get a new one, I had to turn the old one in – but I told him, ‘No, I’m keeping that as a souvenir.’”

Herron said he kept that canteen cup for 50 years, before finally donating it to the Mighty Eighth Air Force Museum in Savannah, Georgia.

100th ARW: Honoring the past
Another part of the shared heritage between the 100th ARW and 100th BG is Maj. Robert “Rosie” Rosenthal. The 100th Operations Group auditorium was renamed in May 2012 after the man who also happened to be Herron’s squadron commander.

“He was a great guy. He only had to fly 25 missions, and once he’d completed them he let the boys go home. But then he said, ‘Give me a new crew – I want to keep flying,” the former staff sergeant said, adding Rosie flew a total of 52 missions.

“By that time he was a squadron commander and got to pick and choose; but he wouldn’t pick the easy missions, he would only pick the hard ones! So when they came in at 2 a.m. to wake us up to fly a mission, the first question we would ask was, ‘Who’s leading the group today?’ If they said it was Rosie, we would groan because it was going to be a bad, bad mission,” he chuckled.

Heron said he had the opportunity to go to several of the reunions in later years, during the 1980s and 1990s, and got to see Rosie again when he attended.

“He was a fine individual — I really liked him; we all did,” Heron said of his squadron commander. “I’m glad to know you have the auditorium named after him.”

Today’s 100th Air Refueling Wing is proud of its heritage with the 100th BG and Bloody Hundredth, and is the only flying unit to still bear the historical markings on its aircraft.

“It makes me feel real good, it really does,” Herron said, his voice breaking with emotion. “I’m real proud of the fact they still kept the 100th Bomb Group designation – that’s quite a treat and an honor, I think, to still have a logo up in the air today.”