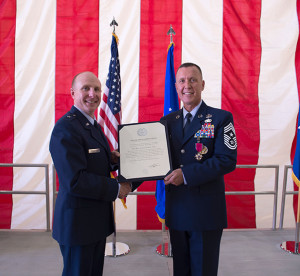 The 412th Test Wing’s command chief master sergeant retired after more than 29 years of service with a ceremony in Hangar 1600 at Edwards Air Force Base, Calif., June 3.

Attended by base leaders, friends and family of Chief Smith, the ceremony was a celebration of the senior noncommissioned officer’s career and accomplishments.

The general introduced and talked about Smith’s family – his parents, in-laws, six children and wife – and complimented them all for the support they gave to the chief over the years of his career. He also commented on the chief’s dedication.

“Attitude, loyalty and love — his all,” the commander said. “Chief has given his all to the Air Force.  When I turned to the chief with an issue, Chief would say ‘I got this’ and he really did. When he said ‘I got this’ it meant he was going to fix it.”

As command chief master sergeant for the 412th TW, Smith has served as the principle advisor to the commander on matters concerning morale, welfare, discipline, training, fitness and effective utilization of the wing’s 14,000 military, civilian, contractor personnel and their families. He also represented the enlisted force at a multitude of meetings, committees, boards and steering councils supporting the wing’s personnel across 57 organizations.

During the ceremony, the command chief talked about his Air Force Career over the years. Smith described why he originally joined the Air Force. He said that although he did love his country, it was not the primary motivating factor for joining.

“At the end of the day, for a young 20-year-old, I just had a powerful need to eat,” he said. “I will tell you,” he continued, “we have core values, we talk about service. Maybe that wasn’t deep inside me just yet, but over time it grows. It doesn’t grow though, without a lot of help, a lot of mentorship and a lot of leadership, supervision and guidance. Over time, my love for the Air Force, my love for the service, my love for being a servant leader grew.”

At the end of the ceremony, the chief made some parting remarks.

Former Boeing CEO gets $62.2 million but loses some benefits