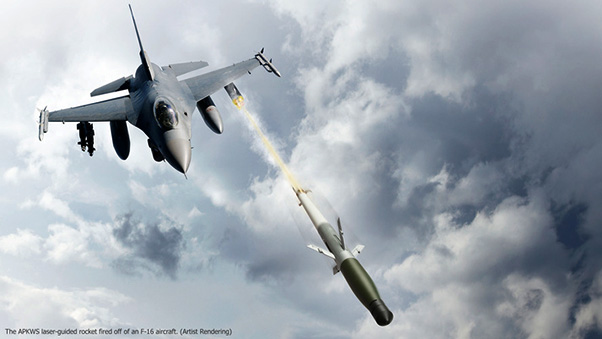 The Air Force fielded the initial units to fulfill an urgent operational need for F-16 and A-10 aircraft, and it has already successfully used the weapon in combat operations.

The deployment marks the first time these systems have been used in combat operations from an Air Force fixed-wing platform and comes on the heels of the U.S. Marine Corps fielding the rockets on AV-8B fixed-wing aircraft. The APKWS rocket, a mid-body guidance kit that transforms a standard unguided munition into a precision laser-guided rocket, has proven highly successful for the U.S. Navy and Marine Corps since 2012 and has also been used by U.S. Army Apache helicopters in combat.

“The APKWS rocket’s innovative ‘plug and play’ design makes it possible to deploy these systems on a variety of platforms,” said David Harrold, director of precision guidance solutions at BAE Systems. “The Navy and Air Force deserve immense credit for streamlining the acquisition process by leveraging an existing Navy program of record to meet the needs of all our military services. We are confident that the addition of this highly accurate, low-collateral-damage weapon system will be a game-changer for F-16 and A-10 users in the U.S. Air Force and around the world.”

Similar to the Army’s acquisition of APKWS last year, the Air Force is acquiring its initial supply of rockets out of the current Navy inventory and is working with BAE Systems and the Navy to secure additional units to meet ongoing demands.

Currently in its fourth year of full-rate production and qualified or demonstrated on more than a dozen rotary and fixed-wing platforms, the APKWS rocket is the only U.S. Department of Defense fully qualified, guided 2.75-inch rocket that uses semi-active laser guidance technology.

Officials provide details on building the Space Force, its structure, and operating imperatives